Mike Inel's surprisingly action-focused puzzle platformer OUTt is sort of a weird little game. It looks like something you might see Michael "OneMrBean" Molinari make, but something about the gameplay puts me more in mind of early 90s classic Another World. Using the [arrow] keys and following the onscreen prompts, you control one of a pair of spindly humanoid creatures who are separated after the ground gives out beneath them. Waking up on the floor of what appears to be some sort of strange underground complex, you discover a place filled with pitfalls, barriers, mechanical creatures and more. And you? You're just one fragile little person, and a single hit or long fall will kill you and force you to restart nearby. Luckily, you'll discover this old place has some technology you can turn to your own benefit, like the ability to create mirrored clones that can pass through objects yet still manipulate switches, and even swap gravity to rotate the world around you. Be warned that if you exit this game while playing, you will be forced to start all over again from the beginning when next you load! 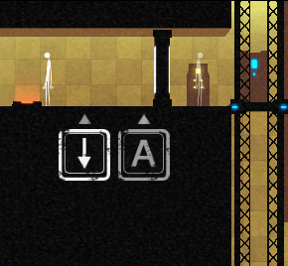 When I'm writing reviews, I tend to write and keep notes simultaneously as I play to keep all of my impressions and points fresh in my mind. For example, if you look at my notes for OUTt, you'll see the word slow written several times with a varying degree of angry pressure and underlined in red. OUTt is a subtly beautiful and strangely captivating little game, but its sluggish movement and controls are the proverbial monkey on its back. Executing a running jump is awkward, and trying to quickly line up a leap onto a ledge above before an enemy spots you is even more so. It's a shame because OUTt is a seriously neat experience once the world opens up a bit. It's still on the short side compared to some puzzle platformers, and experimenting with the way your powers can be used to open a way forward is challenging but not unfairly so. Expect to do a lot of backtracking, and it does feel like it would have been better with a heavier emphasis on its puzzle aspects rather than the running and jumping, or even just a map to keep track of where you are since everything looks the same. Not everyone will have the patience for it, but a surprisingly tense and ultimately touching latter portion of the game will reward the persistent.

Despite its flaws, however, and the fact that, yes, it's an older game, OUTt is still worth playing. Not just because its gorgeous in an understated way, although it totally is, but because it provides a workout both for your brain and your fingers in a clever way.

"its sluggish movement and controls are the proverbial monkey on its back"
Were you too polite to say what you really thought?

The controls are awful. They seem to react when they want to, you should be able to flip gravity at ANY time.

Haha, no, I said exactly what I meant to. :) I didn't find them awful personally or I wouldn't have featured the game. Just slow. That particular style and movement is what prompted my comparison to Another World actually. I don't think you should be able to flip gravity at any time though... I don't think you need to beyond what you must to get past certain areas. It's far from a perfect game, but it was interesting enough to make me stick with it til the end. But, like I said, I can understand why some people wouldn't want to. It's very much a niche game, and one that requires patience too.

Hopefully Mike does some more games, though platforming isn't his forte. He did Which and Why (https://jayisgames.com/archives/2010/02/weekend_download_123.php) so he's clearly talented, and I would rather play a flawed experiment and talk about those flaws than just stick to the safe stuff.

I gave this a few minutes, sorry but it is lost on me.

I think I need to submit Boundaries of Truth to you again, now there is an "older" yet really good game that has truly been passed over.

Yeah, the physics were too loose to make the steep learning curve worthwhile. Basically, I need a few teaser levels to want to try. Here, it's "Level 1 = splat." Not fun.

The game just cannot react when you press two button at the same time....