Amid the one-upmanship of the mainstream game industry, it can be easy to forget that "old" is not a synonym for "outdated". Case in point: NinjaBee's Outpost Kaloki, released way back in the dark ages of 2004. Outpost Kaloki is a city-building game in space. In each level, you are given the hub of a space station, some cash, and perhaps a module or two, and it's your job to build more and better modules to improve your station and reach your goal before time runs out. 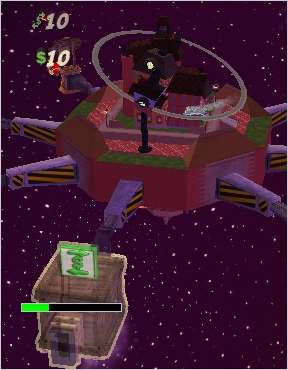 There are five basic kinds of modules that you can provide to attract visitors, keep them happy, and earn you money. You'll also need to build power modules to keep your station running and a repair station to keep everything from emitting smoke and eventually blowing up.

Naturally, all of this costs money, and each module you build also has a maintenance cost. You can adjust the cost up or down, but it also changes how well that module works. Supercharging is particularly useful with power modules, for when you need just a few more units of power to build your next project.

Even more important than power and money is the third "resource": time. As you progress through the game, the amount of time given to you for a mission gets shorter and shorter relative to the amount of work you have to do.

Analysis: As I said earlier, Outpost Kaloki may be four years old, but it is by no means ready to be put out to pasture yet. The gameplay is solid, and the difficulty curve feels about right. The game never really seems to change much from one level to the next, but the setup, graphics, and goals are different enough to make each level as enjoyable as the previous one. 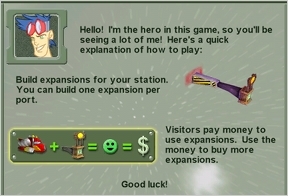 The writing in Outpost Kaloki is silly, perhaps even campy, but it works. Each module has its own little description (The spy training facility's is "They know kung fu."), and NinjaBee has put in just enough interruptions from characters to amuse you without making you feel hassled. The overall plot is no less strange, and one of the later twists had me laughing at its sheer absurdity.

Outpost Kaloki is everything a casual game should be: Colorful, fun, and with bite-size missions and a difficulty curve that will slowly break in a newbie but provide even an expert with a challenge.

I haven't even played the game yet but I got to ask. I know I'm a linux user (ubuntu) so who's the other? :)

i have played it and very fun

Uh, those are the only three I can think of. ANYWAY, trying it now.

Nice game. Kind of stressful when all the bars turn red.

Melak: It's me. Kubuntu will rule the world!

nice little game, nice polished up, and probably quite funny to play for a while. However I didn't even want to play longer than a hour, not to speak to pay for it. After mission 5 or so it gets more challenging than easy fun, having to reply once, twice, threce and so on.... not my tonic on buildup games.

Oh and I use linux too, I just have a dualboot machine, so I'm not like this mac-users that each weekend complain again and again :)