Outer Wilds is a space exploration game currently under development by a team of students at USC. It's a wide-eyed stroll through your own sense of curiosity, handing you a ship and a solar system to explore led only by your inquiring mind. Maybe you'll mount an expedition to that strange looking watery planet you just passed? Maybe you'll land on an uninhabited chunk of rock and discover ruins beneath the surface? Or what's inside that comet, you wonder? Whatever you do, there's plenty to capture your imagination in this game, and you'll play it for hours just to see what you can uncover next. 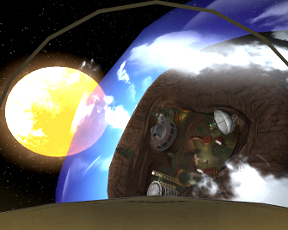 Outer Wilds begins in the village where you learn to control the spaceship and get a bit of information about what's going on in the game's world. Controlling the ship is a simple matter of bumping the thrusters to move through space. Autopilot can do most of the work for you, but when it's time to land, switch viewpoints and guide yourself to the surface as gently as you can. Once there, disembark and wander around as much as you like. Your space suit has a limited jetpack feature and can fire probes that take pictures. Between that and your own insatiable inquisitiveness, you'll be amazed at what sort of things you can discover.

The rule of thumb in Outer Wilds is if you can see it, you can (and should) explore it. From gas giants to artificial satellites to massive angler fish, every celestial body offers something unique. There's no real goal in Outer Wilds, nor is there anything to collect, solve, defeat or fix. You just explore. Few games manage to communicate a sense of awe and wonder as well as Outer Wilds, and the environment it creates for you feels vast and innocent and is filled with ancient history. The game is still under heavy development, but as you'll see from this early release, Outer Wilds has definitely captured something special.

This is absolutely gorgeous. There's more to it than just simple exploration, though - as you explore the planets you'll find relics and text that suggest deeper mysteries. At least until you manage to trigger an alien device, get stranded away from your ship, and asphyxiate while trapped underground sealed away in a cave.

It's buggy, though. There are places where textures will inexplicably vanish, leaving you to flail about until they reappear. Sometimes you'll encounter surfaces that look solid, but you'll bounce all over them and damage your ship if you try to land on them.

If you're like me and you get an access violation error when you try to leave the planetarium, you can still play the game if you hit "J" to suit up and fly to the top of the launch tower. The game will crash when you die, though, preventing you from saving your progress. Hopefully the developer will release at least one more version that fixes that bug.

So far all my download attempts failed (file ends abruptly) but this sounds like the kind of stuff I would love!

This truly is inspiring. It's so hard to create exploration games because when the player explores something, it must be interesting and intriguing. Procedurally generated with perlin noise terrains won't cut it.

What I'm really appreciating about Outer Wilds now is how things shift while you play. I don't want to give out any spoilers, tagged or otherwise, but visiting locations at different times can turn up different discoveries. I can't stop exploring!

I wish I could play this, but the camera bugs out for me after awhile and I can't look around. It's probably just a problem with optimization on certain computers.

Alternatively, you can press the letter "O" to go to the top of the launch pad without having to use the elevator or get the codes.

Still, the game is fairly buggy and there's no way to exit from the title screen beyond Alt+Tab as far as I can see.

the vanishing planet, anyone did anything else with it besides looking at it? I can get really close but it disappears when I try to land.

I'm trying to get my friends to play this game because I have no one to tell about all the cool things I'm finding.

@Diego - Same here, I haven't been able to land on it. Still trying, though, because I'm convinced I can. Even if it isn't possible, I'm still convinced!

You're not supposed to ever want to stop playing.

This game is basically like space - wonderful and terrifying. You get the awe of the planets, and the mystery of what's happening, mixed with the feeling of being drawn inexorably away from your spaceship, or falling away from a little moon with no way of getting back... This game is amazing.

The planet you refer to moves when you don't look at it. What device do you have that allows you to look at things that aren't in your line of site?

A mirror? I don't know :P
But I can approach it. If I understand the analogy with the creepy object in the museum, then if I keep it in my line of sight I should be able to land. But it doesn't work, I approach it from the landing view (bottom) and it starts to fade as I get closer, and disappears completely if I touch it.

very creepy place! but all I could find was a house, a sign just like the one on the village and trees. I wonder what all that means

there's a hologram in bristle hollow (I think) that explains the tornadoes on the gas giant, like the clockwise ones will throw you into space and counter clock wise will do the opposite. So that's how you go deeper into that planet :) VERY cool stuff!

@Mantus - Spot-on description. It's that feeling that makes me come back to this game time after time, even when I accidentally strand myself on the comet because my ship floated away.

@Diego - I'll be curious to see how the narrative evolves as the game progresses. Right now, so much is a mystery and things like the house/sign aren't explained. I really want it to stay that way, as imagination is part of what makes the game so great. It also let's us wildly speculate!

OK, I still can't figure out how to

land on the quantum moon. I know it's possible, because I've seen a guy on Youtube doing it. I think I've figured out the trick, which should be

shooting the probe onto the moon's interior surface to keep it in your line of sight,

but after a few seconds of being inside, it still disappears. It looks like the guy on the Youtube video is aligning his speed frantically, and I've tried that, but I honestly don't know why that would make any difference. I'm stuck.

It is not necessary to actually land the probe on the moon, it just has to capture an image of it. Shooting the probe past the moon accomplishes this.

Day late power of posting, I guess - I literally just figured it out and was coming here to post it when I saw your tip. Thanks, heh.