Future Proof Games (Gregory and Melissa Avery-Weir) serves up a singularly surreal and unsettling indie adventure with Ossuary, a game of sins, lies, truths, coins, and... cabbages? Thrown unceremoniously into the dark and unsettling realm the locals charmingly refer to as the Place of Bones, you find the Reliquary closed and guarded by four members of an Order, each of whom claims they know the real way to fix everything wrong with the world and want you to bring them the four different things hidden in nearby areas... for the good of all, of course. Words of great meaning, secrets keep hidden, places of power, treasures of worth and more, each guarded by unique and eccentric groups of people who are all caught up in their own motives and designs. 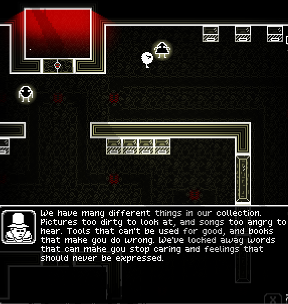 Mechanically, the game is pretty simple. You move with the [arrow] keys, talk or select options with [X], and open your menu with [C]. Everyone wants something in this strange new world, and if you ever want to find your way into the Reliquary, you're going to be the one to get it for them. Mostly, this involves trekking back and forth between characters when you're given a task, but you've got another tool at your disposal... sins, which you can be "corrupted" with by talking to various people who embody them, and thus enable you to corrupt others. A sin can be used from the [C] menu, and activating it inflicts that sin on whoever you're standing close to. Using Wrath, for instance, will infuse a character with rage, which can simply cause them to rant angrily and reveal their true feelings, or maybe spur them into an action that benefits you. 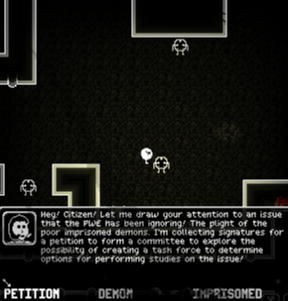 Analysis: To say that Ossuary is initially a disorienting experience is sort of understating it, but at the same time, it's also an immediately intriguing one. With its strange locals and stranger locales, Ossuary has a surreal, dreamlike feel to it, with the ambient sounds and overall look and feel adding to a sense of unease. You're not given much direction, so you're left to wander and explore on your own, which is, for the most part, part of the appeal of the game. The narrative weaves concepts like questioning authority, censorship, and more into the seemingly innocuous conversations you have with everyone, making you want to chase down and talk to everyone multiple times with each sin. On the other hand, some of the directions you're given to complete certain tasks can be frustratingly vague, and some obnoxious reflex-based events feel out of place in the game's otherwise slow and thoughtful atmosphere. Oh, were you enjoying driving warped spirits to distraction for your own ends by manipulating them with feelings and desires? Well CLICK NOW BEFORE YOU EXPLODE INTO RED CHUNKS oh sorry, too slow, try again. Admittedly, the game is very forgiving in letting you try until you succeed, but it still rankles.

Most of the gameplay is simply talking to people and exhausting all your dialogue options, which would be a smoother experience if choosing any one option in any given conversation didn't boot you out and force you to start the entire dialogue over again to choose something different, something that gets tedious when dealing with more than one text branch. Puzzles tend to primarily come down to figuring out what combination of sins to use on people, but there are also a few that require you to pay close attention to your surroundings to solve. It all makes for a strange sort of adventure game, one I felt alternatively captivated by, and needed to take a break from, but the lack of an in-game journal to help you remember who you've spoken to and what you're doing can make that harder than it should be. The game is based on Discordianism, which leaves it feeling sort of like Alice in Wonderland by way of V for Vendetta, and it leaves you feeling like you're scratching at the tip of an enormous iceberg with its own mythology and rules. It's best suited for players who like a narrative that's a challenge, who embrace exploration and discovery, and thankfully the standalone demo/prologue/companion piece The Hodge/Podge Transformer will give you a taste of what the full game is like. Ossuary is creepy and captivating in its own way if you love a good psychological/philosophical yarn, and well worth checking out.

Just as a caveat, something about playing this game was VERY hard on my eyes. Playing for more than 20 minutes at a time gave me an awful headache. Perhaps all the black and start white and shifting mists? Regardless, it's just something to consider if you wear glasses like me or are just prone to eyestrain in general. You'll want to take breaks with this one.

Bad game. Too much text. Attempt to be too philosophical. It's more like a philosophy primer, at the start anyway. Couldn't go beyond that.

I bought the game via the game homepage and didn't receive a link: I wrote them so now I am waiting for a reaction. Before that I think perhaps for some this information may be usefull.

Problem solved; it was a paypal problem. By the way, the game is brillant!

Has anybody figured out the labyrinth?

To those who are interested in solving the grail puzzle with the two torches (the labyrinth and the grid):

In each of the four areas, there's a demon imprisoned in a box. You have to touch all of them three times (press the "x" button next to them). You can only touch them when their shields are off, they all have different strategies to attack you, but it's not too difficult to figure out how do defeat them. Once you're done with this and finish the game somehow, in the main menu a new extra appears: Design. These are some sketches of the game. On the last page, there are some drawings of the grid and the labyrinth which show how to solve them. For the labyrinth, you have to follow the path, but you must avoid some of the letters, namely: C, H, K, U, W.
For the grid here's the order how you should light the torches (encoded with numbers):

@Boloid and others pursuing the grail, you need not free the demons to light the torches.

Clues for the labyrinth:

The clues are on a tablet on a wall to the far east and a person to the far west.

Clues for the grid:

Elsewhere in the Ossuary is a pattern that matches the grid. Learn clues there.

I have defeated three of the four demons, but I just cannot seem to defeat the Fortitude demon. Any tips?

Uh... where IS the "labyrinth?" It's not that little maze in the southeast corner of Order, is it? That doesn't look anything like the letter-diagram.

Now all I need to do is find the 100th and final coin/gem whatever. Or is the joke that there are only 99?