Gregory and Melissa Avery-Weir of Future Proof Games bring us a surreal adventure game in Ossuary: The Hodge/Podge Transformer, a demo/prologue/standalone/I'm-still-confused/companion piece to their commercial indie title Ossuary. What's it about? Well, it's... it's, uh... well, here. You wake up in a locked room with a panicked fellow who's terrified of going outside and dealing with the people there, but everyone out there seems to exist just fine... even if they have strange ideas of what reality is, or how it works. They say there's been a Tilt, and you're there because you asked a question... but was it the wrong question, or the wrong answer? And what does that have to do with everything? Just use the [arrow] keys to move and [X] to interact and find out for yourself. 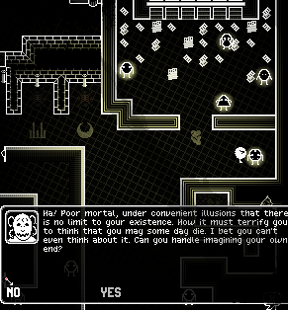 As creepy and weird as The Hodge/Podge Transformer is, it isn't, strictly speaking, a horror game. That would require it to be scary instead of merely unsettling or strange, and it's best taken as a philosophical, psychological adventure. Designed as a lead in to the full game, the gameplay here is mostly just... talking to people. It's extremely dialogue-heavy, and all you ever need to do is figure out what to say next, which isn't hard since picking the wrong choice just means you initiate your friendly chat again. There are a few simple logic puzzles, but the focus here is mostly on setting up the narrative, which can definitely take some doing to wrap your head around. Ossuary is based on Discordianism, and the cast of characters you'll meet all initially seem crazy as a result... but make a weird sort of sense in their own way once you start thinking about it. The Hodge/Podge Transformer is on the short side, but its text-heavy, initially baffling story is one that isn't for everyone, nor is it trying to be. It's mystifying, otherworldly, and not just a little creepy, and for some of us those are very good things indeed, so dip a toe into The Hodge/Podge Transformer and see if you want to keep on continuing through to the Ossuary.

Too confusing for me.

I'm stuck on getting the people in the theatre to stop talking. None of the options work.

@katherineboag: You are trying options that are options, and that is your error.

katherineboag, it sounds like you're actually missing one of the options.

There are two choices of things to say, but if you look, there is actually a choice to say nothing at all. "..." Keep choosing that and they'll fall silent.

I got all of them figured out, but got stumped at the order at the end. All I found was the clues on the left side, but that wasn't enough for me to figure it out.

I got all the rest though... can try to help at those if needed.

Update: Figured out the order at the end, wrote down the order of the librarians.

Each of them can make 2 sounds. You might have to choose the one they're not making by default too see what the other choice is.

After you figure out what sounds they can make, be sure to choose unique sounds for each of them.

Upper left: Book
Lower left: Yell
Upper right: Boom
Lower right: Fork
Talk to the one at the entrance after you've got the sounds right, and he'll unlock Boom.

Clues are from the 4 on the left hand side.

It's an interesting game, but is it just me or are the controls/game a little difficult and laggy? Tapping the movement key budges him just a pixel, while holding it down quickly makes the character overshoot wherever I want to go. Tried closing other tabs, but nothing seems to make a difference.