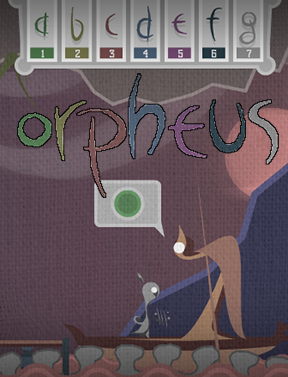 The tragic myth of Orpheus's quest to bring his wife Eurydice back from the underworld has inspired art from the classical era all the way through to Flash games (such as JIG favorite Don't Look Back). Now Mitchell Brien and Finnian Millour have made a game that takes the musical core of the Orpheus character and translates it naturally into puzzles, in the simply titled Orpheus.

The controls for the game are a bit unusual. While using [WASD] or [arrow] keys to move is pretty standard, your only "weapon" is your lyre, which you can play via the number keys [1] through [7], representing the notes A through G. All your lyre can do is play music, but luckily for you, you are playing Orpheus, the most amazing musician who ever lived. Ever heard of the music that charmed a savage breast (yes, breast not beast, William Congreve, look it up)? Anyway, Orpheus was the undisputed king of that. Three headed hell dog? Take a nap. Flowers? Bursting into bloom at a pluck of the strings! Yep, you're pretty much all-powerful. But that won't help you much if you can't follow directions...

Orpheus was made in a mere 8 weeks as a final project for a class, so it's to be expected that it's a little on the short side, with a few typos and other similar minor errors. The developers sacrified length for the quality of the art, which is simple yet lush, abstract yet accessible. The game asks a lot of you: colorblind players are sadly excluded, and even color-sighted people may have difficulty distinguishing two hues of blue. You must also have your sound on and have enough musical talent to copy back a played melody. As if that weren't enough, in order for the sudden ending to make any sense, you must already be familiar with the Orpheus and Eurydice myth. If you're willing to exert that extra effort and meet the game a little more than halfway, however, you'll be amply rewarded for your trouble.

Go right all the way, and press a few number keys to open up the way down.

Copy the colors that Charon thought-bubbles at you.

Go right and copy the notes that Cerebus flashes.

Walk across the lowered bridge. Be sure to jump over the gap.

You must hit notes such that all the flowers bloom.

Copy the music back.

I can't get past Persephone. For the last note, it's like my lyre is out of tune.

Some help for Paul R.

on Persephone, its not that you repeat her melody. Note the color of the flowers. they correspond to those on the tree. Play around with it and they will all open.

Go right all the way, and press a few number keys to open up the way down.

Copy the colors that Charon thought-bubbles at you.

Go right and copy the notes that Cerebus flashes.

Walk across the lowered bridge. Be sure to jump over the gap.

You must hit notes such that all the flowers bloom.

Copy the music back.

Nice concept, but too short.

Ever heard of the music that charmed a savage breast?

...That mental image just made my day.

@SonicLover LOOOOOOOOL. That made my day.

On the game. It's beautiful, and charming, but it was quite short.

Nice game! Liked the music and the concept, but I think it was too easy and short. Also,

I thought it was unnecessary at the end of the credits where he goes into the light but she doesn't and then the game just resets.


I think that part was just silly, but besides that, great game!

@SonicLover: Believe it or not, "savage breast" is the actual quote. Look it up. :)

I don't like the way it cuts either, but there is a good reason for showing that. In the myth this was based off of, Hades made a deal with them. They could leave, but Orpheus could not look at his love until they had both left the underworld. When Orpheus exited the underworld, he looked back at his love, but SHE had not left yet and she was forced to go back.

Adding to what Flare said, Orpheus turned because Eurydice was lagging behind, and he thought that she had tripped.

Did anyone else feel the urge to E-C-E-D?

Jezebeau: Well, on the last part, I did play E-F-G-E-F-D-E-C-D at him just for kicks