Orion has one of the coolest jobs in the universe: creating constellations. While we'd really like to sit him down to find out how a bunch of random stars is actually a centaur with a bow, Trinket Studios has something better to offer. Orion's Forge is a new mobile puzzle game from the studio that brought us Color Sheep. Instead of defeating wolves with rainbows you'll be working with gravity as you manipulate energy to fill stars so they shine bright and clear in the sky. 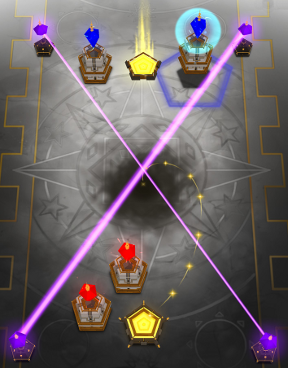 To play, simply drag beacons around the screen, positioning them so their gravitational influence pushes the waves of light into the dim stars. Some beacons push energy while others attract it, meaning you'll have to fine tune your movements to make sure everything is lined up down to the pixel. A creative narrative accompanies the gameplay, adding stories to the constellations you're making. Copious amounts of gorgeous hand-drawn artwork will make you feel like giving reason to these strange constellations you're making. And there's so much hand drawn artwork you might start to feel like you're playing Space Ace.

Orion's Forge has a very shallow learning curve, meaning you can hop right in without any effort. It takes some time for the difficulty to kick in, so experienced players may have to push their way through a handful of stages before the game really begins. Later levels introduce things like portals and polarities to make your job much more challenging than just bumping a few beams of light around. All in all, Orion's Forge is a simple but extremely enjoyable puzzle game that only gets better the longer you stick with it!