Someday, instead of kids playing Oregon Trail to see how easy it was to die of dysentery back in the day, or playing Organ Trail to learn how easy it was to die from a zombie bite, they'll be playing Orion Trail, a prototype of a game currently being Kickstarted by Schell Games, to learn how easy it was to die because your ship ran out of fuel during early intergalactic travel. In this fun resource management choose your own adventure simulation, there are four resources you need to keep track of... food, fuel, crew members, and hull damage. If you run out of any of these, it's game over. Plan on that happening a lot. Start by selecting a mission you'd like to undertake, which involves getting to the end of the trail with high numbers of one of the resources. Next you'll go through a selection process where you chose a captain, a ship, and three officers. Each come with a skill set that will be added to your overall effectiveness in one of five categories indicated on the bottom of the screen. 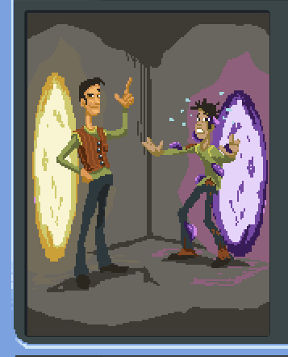 As you boldly go where no one has gone before, random encounters pop up, each with three choices on what to do next. Next to each choice is the symbol of which stat will be used along with a die roll to determine what will happen, along with any resource cost or benefit. A higher number gives you a better chance for a positive outcome, but you can start with a seven and roll a one so there are no guarantees, and sometimes you'll have to choose a lower stat to try to get a needed resource. Just because you've seen an encounter on a previous play through doesn't mean the choices presented to you each time will be the same. And even if you do choose the same thing you've done before, it doesn't mean the outcome will be the same. Points are awarded based on your stats and whether or not you made it to the end of the trail. It would be great to have a high score board to compete with your friends or just to keep track of how well you've done yourself. The enjoyable comedic writing and lovely pixel art immediately brought to mind the original Space Quest series. While what we have here is a good start, it is only a prototype of what could be if the team's Kickstarter gets off the ground. Besides more art and encounters, some of the planned upgrades include dynamic decisions, where your choices somewhat affect future encounters, and away team mini-games. So if you liked playing this, consider donating to get a full version of Orion Trail off the ground. In the meantime, try not to let your crew starve to death.

Pop up ads with auto sound? If the stay, I leave.

Great quick game, but the consumption rates for food and fuel NEED to be reduced. Otherwise I would say that this game is ready to GO!!

Hello! Unfortunately, I'm not sure what you mean. We have no pop-up ads at all on our site and never have. The ads that roll when a game loads help keep both the developers and ourselves running. :)

If I'm correct (I've experienced similar things), Hespetre might mean the ads that when rolled over with the mouse cover the whole screen and play sound. These occasionally appear on the side of the game.

That's what I mean, yes. I'm not going to live with those!
Sorry, I love reading your reviews and walkthroughs, but that kind of ad is just not tolerable.

Btw I've experienced them while looking at reviews, not while (loading or) playing a game.
This is the kind of stuff that makes people use adblockers, which was a major issue here last year if I remember correctly.

We don't select the ads that play on our site. Those are served up by Google. The best we can do is see if we can manually block the ads as they appear, which does require that we specifically know which ads you are talking about (IE, what the product was, and even the URL if you can right-click save as) and where it was (what page you were on specifically when it happened, and where on the page it was). We need all the information we can to properly curate our ads, and you can always feel free to post it in the support page. :)

I use the latest version of Opera Beta on Windows 7 with my Adblocker disabled.

Sorry you're having problems! It sounds like you're encountering a problem with your flash player or your browser. I'd recommend clearing your cache, making sure your browser and all your add-ons (including flash and any other plugins) are up to date. If that doesn't help, you'll probably need to look for help on the official flash forums. Googling Error #2032 looks like it's a common issue, and many people have posted what look like simple fixes. :)

This reminds me a lot of Oregon Trail. Very fun, and infamously hard to win.

Finally beat it. The secret is

It's telling me I'm losing due to a lack of crew when I still have around 35 crew members left....is this a bug or am I missing something?

Could be a bug, I'm not sure. Does it happen every time?

Unity is so bogus. I would sooner hook up my apple//e than download a new browser and install a buggy program just to play oregon trail.