It's the end of the world as we know it, and I feel fine. Well... I mean... aside from the fact that we haven't eaten in days. And the crippling sense of doom I feel from knowing we ran out of extra gas a long time ago. And the knowledge that there are only half a dozen bullets left for the next three hundred miles. Oh, and then there's this bite on my leg I got the last time we stopped that has me feeling kinda... itchy... tasty... but you know, other than that, peachy keen! Organ Trail: Director's Cut is the iOS/Android edition of the popular retro zombie apocalypse simulation by The Men Who Wear Many Hats, and it's here to deliver you the road trip from you-know-where. When the end of the world rolls around and society is in shambles, will you and a group of friends be able to make it all the way across the country, scavenging supplies as you go, on the promise of a sanctuary where the disease hasn't reached? Well... why not? I mean, when has an end-of-the-world zombie scenario ever had an ironically bad ending? 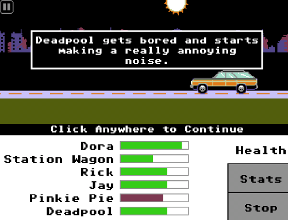 Like its browser-based initial incarnation and source material, your goal is to gather a group of your best friends and travel across the country, though here less about settling America and more about hoping that the rumours of a last bastion for humanity are true. The car drives itself, so it falls to you to manage not only your basic supplies like scrap and parts needed for repairs, but other essentials like food, gas, and ammunition to boot. If you run out of something, you can try waiting on the roadside or in a landmark to trade with travelers, or try your hand at scavenging. If you choose to scavenge, you'll have to fend off undead monstrosities while scurrying to pick up the supplies that appear. You can also adjust the pace at which you drive and your rations if you're worried about food or fuel, but if Lady Luck decides to throw a wrench into your plans, or you can't resist checking out whatever's going on in the distance off the road, having a big stockpile of canned beans might not help you. 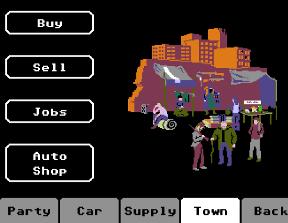 Chock full of references to every zombie flick from The Evil Dead to Shaun of the Dead and pop culture aplenty, Organ Trail: Director's Cut is a quirky, darkly humorous, and off-beat love letter to retro gaming. Scavenging winds up feeling tedious, largely due to how awkward the touch-screen shooting is and how monotonous it gets (occasional attack by mutant zombie dog notwithstanding), and it makes you wish there were more of the random text-based off-road encounters to balance it all out. In general, the longer you play, the more you'll notice how repetitive the game is, and how much success comes down to luck, and those of us who are old and creaky enough to have played the original Oregon Trail when it came out will nod grimly, but also with an odd sort of satisfaction.

After all, in a way, those same elements are exactly part of the weird, hypnotic appeal of The Organ Trail's predecessor, and if you enjoyed that but felt it could do with some more brain-eating, there's a good chance you'll find a lot to like here. The fantastic soundtrack by Ben Crossbones perfectly brings to mind classic '80s horror films, and the pixelly artwork looks great in general. The mobile Director's Cut offers a vastly different introduction and setup over the browser version, in addition to a lot of other tweaks, improvements, and enhancements like an easier to navigate interface, improved artwork, and many more random occurrences to deal with. You'll definitely want to try the free browser version to see if its your cuppa, but for fans of classic retro gaming, Organ Trail: Director's Cut is one bloody good road trip for the doomed-to-die-an-ironic-heroic-death zombie movie star in all of us.

Is it just me or is this game almost impossible to beat? Or do I just suck at games like this?

That's kinda what I meant by luck. If you've played the original Oregon Trail, then you know that planning doesn't always matter because the game will throw out a ton of rapid-fire misfortunes in a row just because the numbers fell that way. Organ Trail is essentially the same thing, though I DID win on my first playthrough through what I'm sure is a lot of luck, but also a lot of scavenging and trading, and by keeping my food high.

It seems like the lead person in the browser version never gets sick, or ill, or bitten, or loses health, or anything. It's weird.

I survived on my first run, but towards the end, it was just the leader alone... and you really have to suck at driving to break your leg... twice... in one day

I did it! After two years of hearing about this game I finally beat it! And, what do I get? Cool techno music and a black screen. Worth.