OPUS: The Day We Found Earth

In a far far future where humans have left earth so long ago that the idea of it has become a myth, the human genome is deteriorating. Some believe that if the original human genes are found a cure can be made, but such a gene would reside on the long forgotten little blue planet. Dr. Lisa Adams and her crew are on the search for Earth and to aid their search Lisa creates a small robot named Emeth. His sole goal is to search the galaxy to find Earth, but one day in the darkness of space Emeth reboots and finds a very dark and very lonely ship. Still looking for the elusive earth Emeth must continue to use the computer system OPUS and slowly discover where his beloved Doctor has gone off to. OPUS: The Day We Found Earth, by Team Signal, is an adventure puzzle game for iOS and Android, but is much more than about scanning the universe as it's also a tale about Emeth. You'll be surprised how much emotion this little orange robot can stir up. There is a free demo to the game, where unlike most demos, this one lets you play almost two thirds of the game before asking you to purchase it. But you won't even need to complete the demo to realize a game with this much beauty in its art, music, and storytelling is one you won't want to pass up on. 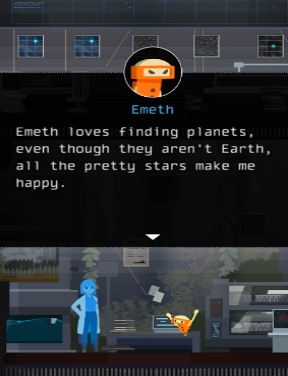 While the real meat of the game lies in the story, OPUS: The Day We Found Earth is also about finding the right stars on a grid system with the hints given to you. Dragging your finger on the screen lets you sail across the stars and when you think you've found the right spot you scan it with the button below to see if it's a planet or not. There are three difficulties to choose from and hints to help you along the way so you don't have to be taken from the story for too long, but the searching in space doesn't take away from the feel of the game and a can actually be a very intriguing part to it. As you find the correct planets to complete your goals you get a bit more of the story and more parts of the spaceship will open up to you. In these rooms you can click on objects around to try to get more clues about the Doctor as well as finding secrets to find more spots of interest in space. It's interesting combinations of cut scenes, exploration, and searching that helps this game flow so well it will be best for you to find a quiet spot and finish it in an hour or so. Though small in size this game is powerful in the emotion of the story it's telling so you may want to be sure there is a tissue nearby.

I downloaded this via Amazon Underground on a Kindle so i got all the extra's included.
However i still found this game infuriatingly bad. The story is nice, but the menu's are just not user friendly!
Somewhere there is a list of

galaxies, pulsars, and other item of interest, including some secrets

but i cannot seem to access this intentionally, it just seems to crop up every so often.
I was unaware that there was even a hint system

I spent an eternity just looking at random stars my first time through.
Even with this assistance the second time through, i was still unable to find the

secret of the armor, origins of the DNA

and just gave up.
The cut-scene dialog or in-room notes may or may not be additional hints, but there is no what of telling which are which, even the additional skins for Emeth don't appear to offer any extra benefit.

4 Effects of Cyberbullying and How to Protect Yourself

92 Views
0 Comments
jayisgames.com— Cyberbullying is sadly as old as the internet itself. Wherever people interact online, there is the potential for bullying, such as when playing online games or on social media....  ...