If you've been on the internet for more than five seconds, you know it's full of cats. For those of us whose hearts aren't miserable hunks of charcoal, it's either wondrous, or we're willing to live and let live, but someone has a serious problem with anyone daring to enjoy online videos about kitties, and in Nitrome's platformer Oodlegobs, you'll take control of the virus he uploads to Mew Tube to get rid of the cat videos once and for all. You monster. See, Oodlegobs.exe is actually a grubby little worm that can replicate itself by devouring any cat videos it comes across, thus spawning yet more worms that move under your control all at the same time. Move with [WASD] or the [arrow] keys and jump with the [spacebar]. Head for the exit in each level, using checkpoints if anything happens, and utilize the overwhelming swarm of your worms to overcome obstacles. That... sounded way grosser than it did before I wrote it. 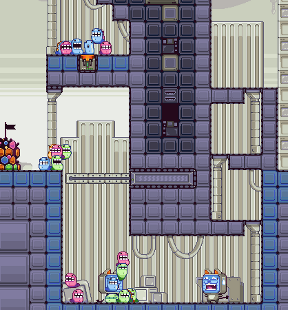 See, the catch is that you can press the [arrow] keys to make your worms do different things (press down first to call all the worms to one position), like form a stack to get to high places, and once you run across teleporters, any worms left behind will be zapped right to you. Which seems awfully accommodating for a computer system under attack by a virus, but whatever. You might lose a lot of worms to hazards, but as long as one reaches the checkpoint or teleporter or end of the level, you'll be okay. Though bloodless and taking place inside a computer system, Oodlegobs is actually... sort of disturbing. Not only do the cat-puters (hold your applause, please) react with horror when you chow down on them, but the end-of-level Oodlegobstrosity you get when you eat the master computer is fairly disgusting. It's like if the Langoliers were digitized maggots. The actual gameplay though? Fairly clever and definitely fun, though wrapping your head around how to wrangle the enormous mass of worms you wind up with in short order can be a little frustrating simply because of how chaotic it is. They tend to jitter around and wind up falling off edges as a result, making precision jumping a pain.

It might have been nice to see more puzzling than platforming, since it is a clever (but gross!) concept that could have had some seriously entertaining World of Goo style possibilities for mechanics and level design instead of the increasingly more precise platforming and traps across longer and longer levels. Oodlegobs winds up being best for patient players rather than the Happy Gilmores amoung us, and all joking aside, if you don't mind the morbid premise, it's got a seriously quirky and colourful presentation and concept. But with lasers, explosive propulsion, timed switches, conveyor belts, and much more, it is not going to be easy. What do you guys think the sequel is going to involve next for people who hate other people enjoying things they don't... Brony Net?

Loads fine for me in Firefox.

This game starts out fine for the first few levels on Nitrome Touchy, but it becomes irritating to play in later levels, when you want to group all the worms together in one place while having them stack up so they are one column. It's a shame too, because Oodlegobs looks great in full screen.

What's also frustrating is the fact that in some areas of certain levels, you can get stuck. Of course, that means restarting, but the R key seems to be dysfunctional in full screen. And selecting the "Restart" option (not "Restart-Level") starts from the very beginning anyways.

Being part of a collective turns out to be inordinately fun. I love that sometimes - though not always - the best strategy is just to rush forward en masse and overwhelm the bombs, spikes and pits with your sheer numbers.

level 7 i think is the one I am stuck on. where you have to follow the 5 paths perfectly

Not loading for me, either. I'm using Chrome. D:

Loaded fine for me yesterday, today no love. :(

I'm sorry you guys are having loading problems. :( Unfortunately, since it's not a game we've hosted, that's a problem with Nitrome's site, so you'll need to contact them to troubleshoot.

It works fine for me, I'm using Google Chrome too.

It's back for me now. Just waited a few minutes and refreshed.