By far the hardest part about being a hero is schlepping your way through all those dungeons. Yes, the dragons, skeletons and bats are hard too but c'mon, walking?! Ugh. Fortunately, this game made in 48 hours for Ludum Dare, One Screen Hero by Wes Selken, Izzy Aminov and Brian Bunker, brings all the action right to you in one convenient screen. Use the [WASD] or [arrow] keys to move and [Z] or click to attack the various mobs that pursue you through each level. There are four portals on the screen in each corner, and a timer counting down right in the center of the screen. You've got to scamper about collecting coins, open treasure chests, and doing battle with all manner of ghouls before the timer gets too low. When it hits zero, the level reshuffles into a new format, so you'd better make sure you're on the right portal so all the madness can start again. This turns the game into a mad dash of collection and combat. Maybe it's not so convenient after all. 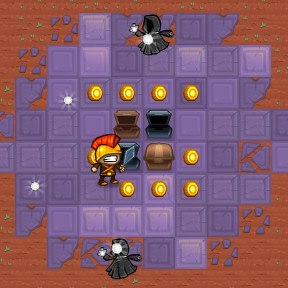 Like other "one level" titles such as Tiny Castle or This Is The Only Level, One Screen Hero thrives on madcap curveballs. It's almost a reflex game in the way it forces you to assess each new level quickly and plot the best course of action. Ten seconds is not a long time, and if you've accidentally crossed an unstable bridge and caused the blocks to fall down behind you, you might find yourself stranded and wringing your tiny fists. This also leads to thrilling risks and split second decisions. Do you go after that chest, or play it safe and stick near the portal? It's delirious fun trying to decide. Unfortunately, the combat isn't quite up to snuff. Your little knight man has one heck of a delay on his attacks, meaning pretty much any enemy you damage is also going to damage you. But this is all part of the rapid-fire calculation you'll have to do on the fly, and for making this kind of fight-collect-fight gameplay feel so fresh, One Screen Hero deserves high praise. After all, walking's a pain, but dungeon crawling? Now that's entertainment!

Doesn't seem to have a win state of any kind...

It ends at level 67; you get a message saying to contact them if you want them to make more of it. Fun little game, but once you make it to about level 20, you start to get really OP. The only enemies that really give you trouble are the wizards, and sometimes you just have to tank a lot of bullet hell damage. (A shield would have been nice.) Twitchy fun all the same.