Once Upon a Life

FlashChaz and Marsh Games's platform/puzzle-y game Once Upon a Life had me a little leery at first, with its melancholy plinky-plonky title music and the premise of playing an old man named Harry collecting memories of his life in the form of snapshots. Oh no, I thought, I don't know if I'm ready for another emotional devastation from the elderly. I'm still not over Up. But it turns out I didn't need to worry, because while it might be a little bittersweet at times, and yes it might make you tear up a bit, Once Upon a Life is all silly and cute and happy, and more like a celebration than anything else... and with a lot more surprises than you'd ever expect. 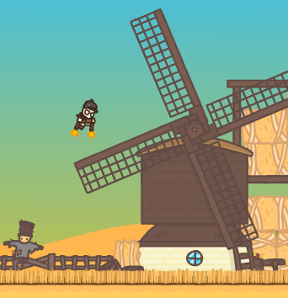 Using the [arrow] keys or [WAD], you move and jump through levels, trying to find and gather all three photographs, though occasionally the game will ask you to find other items instead. Double-jumping activates your jetpack (keep an eye on your fuel!) and hitting [S] will cause Harry to attack, which is how he manipulates switches and other items in the environment. The game starts off very easy and takes a long time to really do anything, which means it's going to lose some players before it even begins. When the game does start changing things up, however, it does so in some drastically unexpected ways, and gradually becomes more of a challenge as well.

Once Upon a Life occasionally suffers from being a little unclear... not just in the lack of direction in some stages that can be unintuitive, but in the way you can't tell by sight alone what objects you can land on or manipulate, and which are just scenery. (The worst offender for both issues being "Inuit Camp".) It's hard to really go into the specifics about the gameplay without spoiling the surprises, but suffice it to say that a lot of new elements and even minigames come and go, and some of them are more welcome than others since not all fit with the style of game or theme it's going for. Still, it's impossible not to admire the sheer amount of variety and creativity on display as the game progresses, all rendered in a simple yet expressive and vibrant style. Harry's end of level narration can get surprisingly emotional, and the earnestness of it is well done. Despite its flaws, Once Upon a Life is an unexpected treat in a lot of ways, and well worth sticking through the initial handful of levels to see what life has in store.

Play Once Upon a Life

I need help for the Windy Meadows level. I can't find the third memory.

I found one in the scarecrow and the second in the straw bale.

you want the one in the hay bale on top of the farthest "shelf" to the right. It's the only one that will light on fire when you fly over it with your jetpack ignited.

I managed to crush the igloo but I have no idea how to break the ice or get the memory in the water. I feel like this is going to be annoyingly obvious to solve.

Very cute game and the voice acting on this is absolutely perfect.

Dandy, if I remember rightly:

After the igloo is destroyed and the ice cube melted, the Inuit guy frees his fishing pole so you can use it (with 'S').

You melt the ice cube by hovering just above it!

Advice on beating the spacecraft, you don't appear to have enough fuel to either get out of the rear compartment or reach the control room. It needs a refuel.

It doesn't need a refuel; there's no mechanism to do that. You have to just conserve fuel.

Any hints on where the 3rd picture is on "Inside Jungle", I've got the 2 obvious ones.

Where's the traffic cops? It must be some point after the naval battle, but I don't see where

You can melt the ice cube with your jet pack! :)