If you asked me to name all the ways a game developer could spin the classic falling-block puzzle, you'd be here a while. There are a lot of Tetris variations out there, but Omino by IcyLime manages to stand out. At first it seems almost too easy: use the left and right [arrow] keys to maneuver blocks, up to rotate, down to accelerate, and [spacebar] to make the block fall instantly. The trick is, the game doesn't get any faster as you level up. Instead, the blocks get larger. You start with single-square blocks that are easy to place, and eventually move up to the standard Tetris tetrominoes, and after that things get complicated. (There are a lot of shapes you can make with six or more squares.) 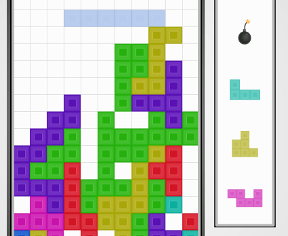 There's a nice amount of strategy to Omino, because after a few levels, powerups start appearing. The bomb will make the squares around it disappear, and the weight will compress any gaps in the column it lands on. These two simple powerups change the tone of the game to a defensive one: instead of doing the best you can as fast as possible, you find yourself taking your time to set up your next move and hoping for a weight to come up so you can get rid of that one dang gap. It would be nice to have the option to start from a later level and avoid the really easy parts, but even then, it's a refreshingly original challenge.

Awesome concept, but I'll admit...once things went past Daedalian Opus shapes, I wussed out and quit.

Been sort of keeping track of high scores

Highest was Level 7 x64 442,???
but I didn't catch the last digits before I clicked play again; I had not realized that I beat my high score.

If you have not played yet and you like tetris, then you should play. Don't give up and try try again. A good strategy is

to use large straight piece in the beginning and then stop making giant holes as you progress because later the holes can be detrimental. However if you have a bomb or long piece coming up then they can still be useful.