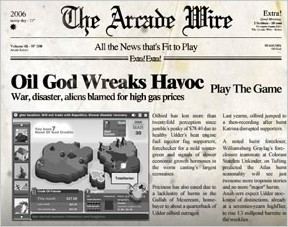 Have you ever harbored a secret desire to see gas prices soar? Have you always wished you could manipulate the politics and economies of the world to double the cost of fuel? Who hasn't? Now with Persuasive Games' new simulation, Oil God, you can!

Not only is doubling the price of gasoline allowed in Oil God—it's your goal! You have 5 years and 8 godly wraths to wield on the puny world below you to double the cost of fuel in a target country. As I said above, you can also switch the government types and economy types to make countries more susceptible to war or natural disasters, or just make them inefficient in moving out the oil. To keep you from dropping all of the disasters at once, you're given god points over time which can be used to cast disasters. Some take more god power than others—dropping down aliens to rain chaos upon a country is particularly draining.

The game is fun and offers a lot of interesting choices and options to play around with. The first few times you'll play you're likely to spend your time trying to find out which actions do the most damage. The music is fantastic, it's the perfect mix to put me right in the chaos spewing god mood.

Analysis: Oil God is a great new game with a cool art style and a fun perspective. It takes on a topic that has lately been on our minds and gives us a fresh look at how it all works. It also features a pretty intense market model and its interesting how everything in the game ties together- there are a lot of ways to win the game.

My only complaint is that it can get a little too easy once you figure out which disasters work best. Even on medium difficulty, I was able to beat the game in under 10 seconds to get the weekly high score.

But that was only after a while of playing and experimentation. For the first half hour I was trying to invest my money and god powers into alternative fuels. :)

Funny game, but really too easy and pointless. I playe don the hardest mode and win as fast as i can move my touchpad. I am ranked 11th on Premium... this game is no fun as something competitive because all it is about is who can move the mouse the fastest. It very satirical, however, and that is why it is fun.

I like setting up alien invasions and making everyone communist, comrade.

Hi Lee, yes it's Flash and therefore should work on Macs. In fact I have it loaded and it is working fine on my Mac Powerbook.

But the previous game is not, Jay. Some help? Please? :)

Imok - the previous game is Shockwave and works just fine on my Powerbook. Maybe it's an Intel thing?

I've got an Intel mac, and it works fine. Just make sure to get all the most recent players, you should be fine. (There are links at the bottom of this page)

I got a weird glitch that made me get one day for the easy setting... go on, look at zeldafreak104
1st daily
7th weekly
6th monthly :)

Oh right- to get shockwave stuff to work, you have to go to Safari in apps (I'm assuming you're using that, but if not? I'm not so sure...), click "Get info" and choose "Open using Rosetta"- it works, just somewhat slowly.

Ahhh, I'm using Mac-Firefox and the game loaded but no text and nothing was clickable. I'll try safari and see how it works. It might've just been a glitch.

Ack... tried it and it's still giving me the same problem. It loads up, music plays, I click play and it opens up to the first page with buttons but no text and I cant click anything.

Lee, it sounds like a Flash Player problem. Try reinstalling the latest play and see if that fixes it. =)

I haven't yet started, but I'm quite turned on by the music.

I love the commentary you get when you use powers

"Destablilzing economies is fun... and profitable."

Okay, so maybe this God is a bit too fun-loving...

heheh.. rather shallow gameplay, but fun for a while.

It was just a flash problem, thanks Jay. :)

The game was interesting. Not quite what I expected but fun nevertheless.

Thanks for the review and thanks to all for playing. About the questions of depth and replayability, the goal of these little newsgames is not the same as normal casual games ("easy to learn, hard to master"), at least not for me. Rather, it's like editorial cartoons. You play with it for a little bit and then move on. They are created in ~3 weeks and meant to be released rapidly. You can read a little more on this topic here.

Ian - while I certainly see your point on how the game is meant to be played, the time simply goes by so quickly that it's ridiculous - it's so fast that you can't even explore the mechanics of the game.

Even something as simple as slowing the speed of time down by a factor of 4-5 or so would greatly increase the appeal of the game; as opposed to taking 5-15 seconds to play a complete game, it might take 30 seconds to 90 seconds to play through one, which is certainly short enough for the crowd you are looking for.

Great site, Jay, you've got some great games and great walkthroughs on here as well.

However, and I don't want to tell you how to run your site, but, you really do have incredibly low standards for recommending games. :-(

Thank you for the kind words about the site. But I disagree. Your "incredibly low standards" comment couldn't be further from the truth.

It's a hard thing to please all people. It simply cannot be done. Some experiences are worthwhile for different reasons. I believe we have the highest standards of all similar sites out there. Sure, some games that we've reviewed are not as good as others, but we work very hard at making sure the games we do highlight and recommend are the cream of what's available at the time.

This particular game was part of a series of politically themed games we ran just before the mid-term elections here in the US.

I think I worked out a good strategy for this game:

1. Make sure you know what your target country is. Know the courses petroleum travels over from the drilling countries to your target.

2. Now it's time to start meddling in the world of politics. Change the drilling countries so their governments oppose the target country's. Remember:

Democratics will not trade with Totalitarians, and vice versa.

Imperialists will not trade with Theocratics, and vice versa.

Theocratics will not trade amongst themselves.

Now that you've ruined the direct way of getting through things, nations are gonna try to find middlemen.

3. Considering all but one countries in this world have access to the seas, it's impractical to destroy all middlemen, for that would mean destroying all trade altogether. It would take too long to accomplish your main goal. Now, set as many natural disasters among oil-producing countries as possible. Have the target nation declare war on all oil-providing nations.

4. Repeat Step 3 until you accomplish your goal.

My name as god of petroleum is "Infinithane". Reason? Petroleum (crude oil) is made up of a mixture of alkanes (hydrocarbons with just single bonds), the suffix denoting alkanes is "-ane", the prefix for infinity is "infini-", and infinity is pretty spiritual, isn't it? It just seems to fit.

Prepare to get blood on your hands. All you need to do is get oil-producing countries and the target countries all fighting amongst themselves. With everyone at war, all the oil will be quickly shut down. The method normally averages out to around 150 days in order to win, regardless of difficulty.

Using this strategy, I managed to complete Premium Unleaded difficulty in NINETY-TWO DAYS. Of course, that was due to convinent locations, but it normally goes around 150 days regardless.

I keep on outdoing myself. Using the latest strategy I posted on here, I managed to get a score of 34 days on PREMIUM UNLEADED difficulty.

Now, if only I could also wreak havoc on the worlds of coal and uranium...

Was it supposed to be this easy? All I had to do was launch an alien invasion in all three countries with oil.