A strange name for a strange game, Oh Hi! Octopi! is an arcade/puzzle release from the creator of 1-bit Ninja, kode80. Combining single-screen levels with matching-type gameplay and purposefully obtuse controls, it can be a maddening experience trying to learn to play the game, let alone actually accomplish something. But once you do, it's a great feeling, and you'll finally be able to say a hearty "hi" to those little octopi as you smash them with a hammer. 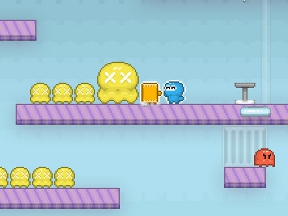 The two sides of your device's screen are all you need to control the main character. Tap and hold the left side to go left, and tap the right to go right. To jump, alternate tapping the left and right side of the screen (see what we meant by "obtuse"?). You'll notice that each time you tap to move your character swings a little hammer. The goal of the game is to use that hammer to remove octopi from the screen. Once you remove ten, you'll progress to the next round with faster foes that are harder to corral.

Removing octopi isn't as simple as whacking them, however. To clear a group, you first must have three or more together (preferably dazed with a hammer strike) and of the same color. Then, head to the plunger and hit it a few times to blow a paint bubble. Chase the bubble to your stunned crowd and watch them collide. The bigger the group you clear, the more points you'll get. Wandering octopi can cause lots of problems when you have a sturdy little bunch collected, so keep moving around the screen to monitor everything that crawls! 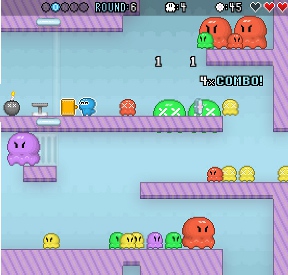 Analysis: Unusual. Very unusual. But also simple, challenging, rewarding, and intricate. Oh Hi! Octopi! occupies a lot of your brain with just a couple of gameplay elements, and the combination of action and puzzle styles can satisfy just about any game craving you might have. You'll almost feel like a little farmer sorting sheep as you bring them back from the pasture. Multi-colored sheep, I guess. For all of you who love organizing things, this game will definitely please.

The controls are really the only issue Oh Hi! Octopi! has, but one is lead to believe the button economy was a purposeful design choice, not an oversight. Using just two different taps to move, jump, and swing a mallet puts a lot of pressure on each side of the screen, but it also frees you up to think about the octopi and what they're up to. Wouldn't you rather pay attention to the game instead of fat-fingering on-screen controls in a futile attempt to issue the correct command? Also, it adds to the sense of arcade insanity having to overplay two little buttons for everything you do.

Oh Hi! Octopi! is a highly enjoyable mobile arcade/puzzle game, one that has the ability to polarize players given how easy it is to both love and hate. Spend some earnest time getting the smack-fueled controls down and you'll quickly appreciate what kode80 has given you: a crazy, nigh-uncontrollable arcade game that allows you to tame monsters and organize everything into neat, color-coded groups. It's the stuff some of the best puzzle games are built upon!