The Pied Piper. Stories tell of the strange man who offered to rid the town of Hamelin of its rat problem using nothing more than a musical pipe. The citizens agreed, but when they refused to pay for his service, the piper grew angry. Using his magical/musical talents, he led the town's children away into the night, apparently because it's difficult to break kneecaps with a flute. In GO! Games and Alawar's latest hidden object adventure hybrid, Oddly Enough: Pied Piper, you take on the role of hero (well, debt collector), investigating the piper's doings and trying to track down the kidnapped children. 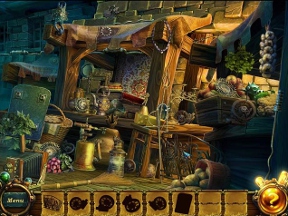 As you try to put thoughts of debt collectors out of your mind, Oddly Enough: Pied Piper lures you into its nighttime world of late medieval Hamelin. You must investigate the citizens' homes in order to start collecting the promised ten coin fee, but no one is really willing to help. Seriously? Townsfolk are so "frugal" they won't pay a few gold coins to save their children and get rid of hundreds of rats? That's a bargain! Nonetheless, it's your job to pry cash out of the folks you meet, and you do so by wandering through the village, assembling items and using them to solve puzzles.

Oddly Enough is a "fractured" hidden object game, meaning you won't have written lists of items to find in crowded pieces of scenery. Instead, objects are broken into barely-recognizable pieces shown as a series of silhouettes at the bottom of the screen. Match the shape to an object above, click it, and you're good to go. Each hidden object scene has a few items to find, all of which are assembled into a very useful piece of equipment you'll use in the main game.

Apart from the hidden object scenes, most of your time in Oddly Enough will be spent wandering the streets in a casual adventure sort of way. You have a bit of freedom to explore, though solving puzzles occurs in a very linear manner. Tasks are spelled out clearly before your eyes and kept tucked away in a journal for later reference. You'll often have half a dozen or so quests running at the same time, which makes you feel very cool and important. The game's hint system is there to help if you get stuck, but a curious mouse cursor often gets you out of trouble just as easily. 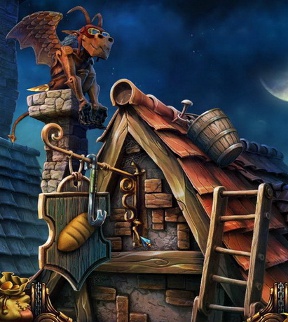 Analysis: Oddly Enough: Pied Piper is an intentionally quirky game, from its fairy tale story to the casting of the main hero as a debt collector. The problems you solve for townspeople range from the unusual to the downright odd. One gentleman has a rather upset cat you must pacify. And how do you pacify it? A valerian concoction, of course, the very herb the piper was rumored to have used. Kitties do love the valerian!

Challenge is Oddly Enough's weak suit, and the game does so much hand holding you'll often wonder if the designers wanted you to solve the puzzles on your own in the first place. The only thing resembling difficulty are some of the often too-vague item silhouettes in the hidden object scenes. What's that skinny bar thing with a lump on the side? A section of someone's colon? Bull horns? Where's that hint button?!

Expect about three hours of play time with this game, about standard for most modern hidden object titles. When you reach the end, though, you'll almost certainly be left with a feeling of disappointment. The ending is, well, incomplete. Did the studio need to rush things to meet a deadline? It feels that way. Despite the endgame letdown, the rest of the experience is a good one.

If you can forgive a few money-saving visual shortcuts here and there, low challenge and a truncated ending, Oddly Enough: Pied Piper can take you on a smartly-crafted hidden object adventure ride filled with quirky fairy tale-inspired scenery.

Oddly Enough: Pied Piper - Did anyone else experience the apothecary guy NOT giving you a coin when you first speak to him? Because of this, I am now stuck and can't do anything. Every hint, no matter where I use it, says there's "nothing to do here." Help.

think we shuld buy it lloool