The cyclopean robotic protagonist of Martin Magni's Android and iOS physics puzzler Odd Bot Out may have just gotten rejected from its factory and dropped down a garbage shoot for not meeting standards, but it's still going to waltz right into your heart. Or, well. Pitter patter awkwardly into it like a nervous budgerigar. In each level, your goal is to get Odd Bot to the exit, which is easier said than done. Tap on Odd Bot and drag in the direction you want it to move, and it'll totter in that direction until you let go, though it can only step up onto obstacles one block high. As a result, to get Odd Bot safely through, you're going to need to get creative... literally, since many objects onscreen can be combined or manipulated. Red blocks can be stacked and snapped together, for example, or even onto Odd Bot itself, making stairs or weighing things down, while some buttons can be wired to different robots or contraptions to activate them when pressed. It's up to you to figure out how things function and interact with one another, especially since there's no tutorial or text to help you! 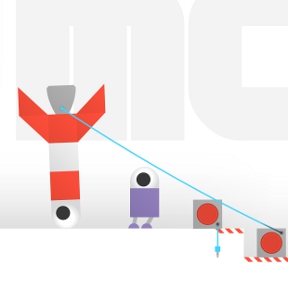 Despite not speaking a word or emoting beyond swiveling its single eye to follow your every movement, Martin Magni's Odd Bot is one of the most immediately endearing game characters you'll ever see. Character movement can have a huge impact on your perception of something, and the way Odd Bot appears to anxiously pat its little feet on a narrow surface, or a long centipede-like bot stretches forward and feels about with its forelegs in midair as you lead it across a gap illustrates just how good the game is at crafting robotic creatures that don't feel cold and empty. Everything about Odd Bot Out's design invites you to play with it, and the lack of directions actually works in its favour here since it encourages you to experiment and discover different solutions. Most levels tend to be short, contained puzzles, which works in the game's favour considering there are 100 stages to play, though some of them are more inventive than others. The problem, however, is that Odd Bot Out's physics aren't always as responsive and fluid as they could be. There's something very clunky about moving Odd Bot or other robots over anything but flat terrain, so if you don't have your momentum just right, they can get hung up on simple inclines or ledges more often than not. This, combined with minor annoyances like being unable to scroll pan around a level, or getting certain pieces stuck to one another as you're trying to move them around in a different way, can make playing the game fiddlier than it should be. Still, Odd Bot Out manages to infuse a sense of childlike wonder and whimsy into its simple, clean design the way few other games can. You'll play it with a smile, always looking forward to finding out what comes next, and along with its creative use of physics-based gameplay, to me that makes Odd Bot Out a no-brainer recommendation to check out no matter who you are.

1,882 Views
1 Comment
jayisgames.com— Jigsaw puzzles have been around for centuries, and they haven't changed much in that time. They don't need to. Nothing beats a jigsaw when it comes to quiet, focused, meditative gameplay. I'm A Puzzle, the online jigsaw compendium from...  ...

1,247 Views
3 Comments
chrpa— Jayisgames needs your help to continue providing quality content. Click for details Welcome to Mobile Monday! This is the first Mobile Monday in 2022 and we start the year with three excellent games. No need to introduce the developers...  ...

3,632 Views
10 Comments
chrpa— Jayisgames needs your help to continue providing quality content. Click for details Another Christmas game arrived ex post, this one by Neat Escape, and it is as holidayish as possible. Shining Christmas trees, beautifully wrapped gifts, Santa with reindeers...well, we...  ...