What started as a crazy student project has grown into a crazy indie game. Octodad: Dadliest Catch by Young Horses continues the mad premise first showcased in the 2010 tech demo, adding a storyline and a handful of new environments to stumble around in. What should be a series of ordinary tasks end up being wacky hijinks in the world of Octodad. Think of it as QWOP in a 3D world and you've got a good idea for just how unhinged this game can be. It all starts at the wedding. Octodad and his lovely non-octo bride are about to tie the knot, but Octodad is late, as usual. Getting down the aisle wouldn't be a problem if you had a skeletal structure to support your jelly-like body. But you're Octodad, you'll have to make do with squishy tentacles stuffed inside a suit. Control each leg independently, flopping them forward one at a time as you move forward...ish. Your arm works in much the same way, allowing you to pick up and manipulate items with a high level of perceived precision. Don't make too much of a mess while people are watching, though, or they'll get suspicious. Can't let them find out what you really are, can you?

Things get "serious" when the family visits the aquarium, a place no octopus would ever want to go. Sharks, octopus cookbooks, biologists that can spot a fish no matter how snazzy their suit is. Just about this time Octodad's nemesis (a chef, naturally) starts stirring up trouble, making it even more difficult to get things done like an ordinary dad. 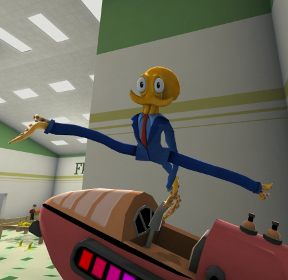 Analysis: Octodad: Dadliest Catch feels like one of those heartwarming sitcoms from the early '90s (or mid-'50s). He's an octopus, you see, but nobody really notices. He's just trying to fit in, but the world wasn't built for someone of his species. This provides a nice contrast with the flopping walking style you'll be doing a lot of, and it's balanced to a point where the game doesn't turn into a constant exercise in stealth. Yes, you want to fit in, but that doesn't stop you from whacking people with random objects or tumbling around on banana peels.

Most of Octodad's tasks amount to fetch-style chores, which feels a bit samey after awhile. There are only so many things you can do with the wobbly limbs premise, but squishing through shelves and solving the various mini-games stays intriguing longer than you might think. The artwork, storyline and fantastic sense of humor keep you interested even when the missions begin to fumble. No matter how you cut it, Octodad: Dadliest Catch is a great piece of fun. And when you start to finally get the hang of things, try co-op mode with your friends. We dare you.