We've briefly discussed Cornfox & Bros' lovely iOS action adventure Zelda-alike Oceanhorn: Monster of Uncharted Seas before, but now that it's finally made the leap to PC on Steam, I thought it was time to take a little more in-depth look at it. The game follows you, a young lad in a world taken over by a vast sea, when your father goes missing while hunting the titular legendary monster. You quickly discover, through the influence of a magical pendant (as you do), that only you can stop the evil beast, but to do so you'll need to sail the ocean far and wide, finding magical crests, heart pieces, and more while solving puzzles with bombs and arrows... and pots. Stop me if any of that sounds familiar. But while Oceanhorn undoubtedly borrows very heavily from a lot of classic Zelda mechanics and themes, its beautiful style and breezy casual gameplay makes it a rock-solid addition to any action-adventure fan's library. 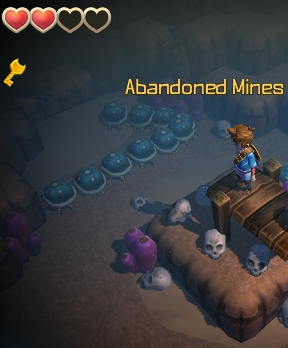 Playing Oceanhorn is fairly simple, especially on a touchscreen. Simply drag your finger anywhere to move your character, and use the two buttons on the right side of the screen to attack, interact, and use your secondary item. Your health is represented by the row of hearts in the upper-left corner, and if you take too much damage, you'll be booted back to your last checkpoint. Smash pots and cut bushes to find coins, and slay monsters and complete achievements to earn experience to upgrade your Adventurer Level, which grants you bonuses and unlocks new items. As you explore and meet new people, you'll unlock new islands you can travel to, though until you unlock some extra items, sailing mostly involves simply sitting and watching as your boat zips towards whatever waypoint you set.While players seemed to have no issues with the PC port, Oceanhorn's touchscreen controls aren't as responsive as they could be. Our little hero tends to make wide turns and move at a light trot, making careful maneuvering more frustrating than it should be, and stairs or narrow bridges the occasional trial. The biggest problem, however, is that Oceanhorn might be a bit too casual. It's lacking in any real bite or significant depth, and if you've played an action-adventure in the last decade or two, a lot of it is going to feel extremely familiar. And, come on, those are totally Zoras. The end result is a game that looks beautiful and provides a lot of fun, but doesn't really expand enough on its mechanics or its world to feel particularly distinct.


On the other hand, Oceanhorn: Monster of Uncharted Seas still manages to capture that bright, colourful style and sense of adventure that made games like Zelda so much fun for so many people when we were younger. While that "all ages" vibe does mean it may not prove challenging enough for some, especially given its slow beginning, players looking for something that revels in every bit of sun-soaked adventure and light-hearted whimsy it can squeeze out will find a lot to love in it. The game looks especially beautiful on the iPad, with rich colours and big, well designed character models, and the simple controls means just about anyone at any age or skill level can pick it up and give it a whirl. The story is straight-forward but well told through some excellently acted voice-over narration, and all the characters and enemies you meet feel like they stepped straight out of a storybook. A storybook you might have read a few times before, but one that's soft and worn and dog-eared in a very comforting, cozy way. If you're looking for a casual action-adventure that aims to capture the feel of games like The Legend of Zelda: The Wind Waker and will make you regress to the old-school classic console days of your childhood with a decidedly modern and lavish presentation, Oceanhorn: Monster of Uncharted Seas is an easy recommendation.