You can move away from people, you can lock yourself inside to hide from nature, but you can't ever escape what's in your head. Or at least that is what the premise is for Nyctophilia by Cat in Jar Games. This free indie game follows our protagonist as he tries to recover from something he'd rather forget. Fighting his way through nightmares he must do everything he can to stay sane. But when you're staying in a house where the last owner may have not had all his marbles himself there is only so much you can do. While it plays like a point-and-click adventure, this is a "mouse free" game where you move with the [arrow] keys and inspect, pick up items, or makes choices with [X]. The [Tab] key lets you into your inventory, see the notes you've collected or view what your main task at hand is. This slower paced mystery has two endings, a few puzzles and an unnerving atmosphere from start to finish. 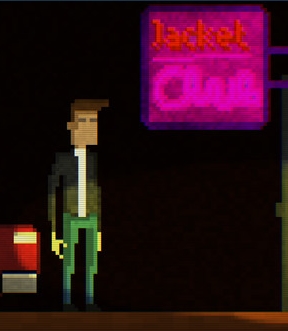 Nyctophilia is a slower paced game in all areas. You even have a slower walk and some pauses between the dialogs go on a little too long. However it does keep things interesting as it goes along so the pacing won't bore you. It also has you feeling the weight that the protagonist is carrying even if you aren't sure what the weight is. You're able to sympathize with him much more and worry for his safety as he begins to explore and discover things that most of us would avoid at all cost. Though it's made to be played through at least twice to try and get both endings it's not really a game you'll want to restart as soon as it ends. But you'll really want to try and get the alternate endings since the first one can be a bit of a let down. In all honesty this game has a big build up to a kind of anticlimactic ending, but if you go in knowing this you'll be able to appreciate the game for what it is and not what it was trying to be. So while it may not end up on your favorites list it's still a visually appealing and thought provoking game that would be a shame to miss.

I downloaded the .jar file, but am getting the following error: "To use the “java -jar Nyctophilia.jar,” command-line tool you need to install a JDK."

I've never had to install a developer kit to use a java app in the past. I may pass on this one.

Yeah, that sounds a little spammy. Although the reviewer did play an actual game, so it does exist. I'm thinking I might download later/this weekend maybe and follow up on if the Mac version too is user-unfriendly.

How odd. I don't remember if I had to do this or not. (I usually download a bunch of games at once) but nothing that shouldn't have been downloaded wa and my PC is safe.

See, to me that's still ultra-technical. They should make this game in a user-friendly format.

I got up to the point with

switches with numbers next to them

but every time I press Tab to open my inventory the game closes without any sort of crash report. I tried starting the game over again and getting to the same spot only to have the same thing happen(what a pain).

I'm going to try deleting and then downloading the game again to see if it fixes any of the issues. If someone has a fix to this let me know.

I found an updated version on Steam that fixed the issues I was having: http://store.steampowered.com/app/402890/

It has faster text, corrected dialogue, and patched bugs.

I doubt anyone cares by now but on the off chance someone comes here - there you go.

Well .... Usually, I like going in to this type of game "blind". If I had read the whole review this time, maybe I would not now be feeling so disappointed. I did enjoy most of this game. I did relate to the protagonist along the way. Maybe it's my own pathology leaking out sideways, but I don't think "anticlimactic" is strong enough. I felt cheated. Everything I liked about this game was overwhelmed by what I think is a rather cliche ending.