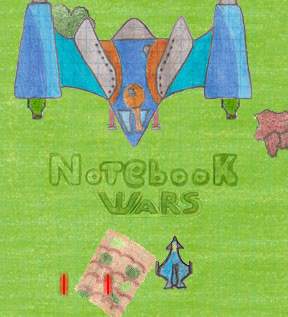 I'm not a very good artist, or "drawerer" as we say in Pennsylvania. Well, the hill people say that when they come down by moonlight to snatch babies and discuss art. I can draw something that sort of looks like a helicopter, something that kind of looks like a dog, oh, and trees. I'm pretty good with trees. And pyramids. But despite my deficiencies in doodling I'll still fill up my paper's margins with them. So, I'm fond of games that co-opt that aesthetic, like the new hand drawn, top-down, vertical scrolling shoot-em-up from Francisco Ferreres, Notebook Wars.

Notebook Wars has the classic shmup plot: you're moving in one direction and some other guys are moving in the opposite direction and you won't stand for those kind of shenanigans. So, you'll use your mouse to move your ship around, hold down the left button to fire and press the [space] bar to drop one of your A-Bombs.

You'll get cash for taking down enemies. You'll need a nice stack of it for the upgrade shop if you're going to make it through all 15 levels. There's plenty of stuff to buy: five different ships, eight different kinds of weapons each with two kinds of upgrades, and even upgrades that allow you to equip extra weapons on your ship. Trust me, you'll need the firepower and, unfortunately, an eraser isn't one of the available weapons. 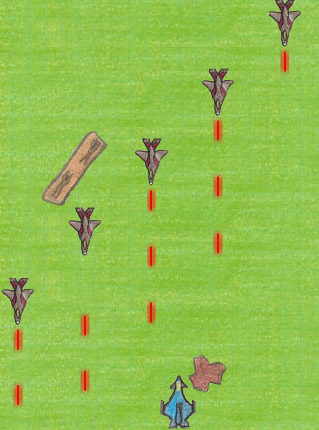 The gameplay is standard for a game of this kind. There's a nice variety of enemies and bosses every three stages or so. The real fun comes in customizing your ship. Once you have a nice amount of weapons available and all three weapon slots open you have a lot of options. You can set all three slots to have the same weapon, sure, or you can create a deadly mix. A good weapons set-up can also help avoid some grinding.

For some people "grind" is a dirty word. However, I fall in the camp of those who like it, so I might not be the best judge on whether a game has too much of it. You can certainly play Notebook Wars as a grindaholic, particularly in the earlier levels when you don't have much equipment and money isn't as plentiful. However, if you upgrade wisely and play skillfully you won't have to worry about it.

There are few problems, though. For awhile your plane moves very, very slow. The enemies move pretty slow too, so it kind of balances out, but if you're looking for a fast and frenetic game this probably isn't the best choice. Also, for the first few upgrades your ship tends to be kind of chunky, making it hard to move in between enemy bullets. By the middle stages, you'll be racking up enough cash to get a sleeker ship, though.

Notebook Wars biggest source of charm is in the hand drawn art style. Most elements are very simple, such as the landscape, but others, like the enemies, have little details thrown in. The bosses are the most intricate pieces in the game and yet still complement the idea that this is all taking place in a notebook. The best touch is the most subtle. If you look closely or look at an explosion you can see the blue lines of the "paper." It's a small thing, but sometimes the little things can be just as good as the big.

Notebook Wars starts out a little slow, but it's not long before it picks up. It's a game with a lot of charm, mostly from the art style. Grind fans will enjoy beefing up their ship early and dominating other levels. Fans of a more strategic approach will like trying to optimize their ship with what they have and taking down enemies while avoiding the bullet barrages. If you're looking for a nice, relaxed and casual, cool looking, vertical scrolling shoot-em-up, it'd be hard to go wrong with Notebook Wars.

It is a Cutie Game.

The style reminds me a lot of Upgrade Complete. Although I did prefer that.

Upgrade Complete is indeed awesome and compare to this game was much faster. I simply don't have the time to try this slow pace game but as long my cookie is there I may come back to it and do a stage at a time.

First thing I buying will be the speed upgrade. =P

The amount of upgrades is pretty good I have to somewhat force myself to get past the boring part.

"like the new hand drawn, side-scrolling shoot-em-up from Francisco Ferretes"

Side scrolling? What are they teaching the kids these days?

As to the game I found the start was too boring to continue for what begins as a very basic vertical scroller.

Why can't I see what I'm gonna pay for?

Fun game, too. LOVE the art style, felt like I was daydreaming in fourth grade.

Too slow-paced for my taste. I also agree with Roi - upgrades being so expensive that you almost *have* to pay for them hardly allow you to try out the game. They also seem to have little effect, given how much you pay for them.

Having just read an article about the fine-tuning of Canabalt (http://blog.semisecretsoftware.com/tuning-canabalt), I quickly noticed how big the plane hitbox is. Too big, I'd say, to properly dodge bullets.

I believe more casual players will like this one. I'm no good at faster shmups, I get killed too easily and frequently to enjoy them very much.

Yeah, this is top-down, not side-scrolling.

I like this game (although I agree the cost of the upgrades doesn't make total sense). The graphics are really nice.
Has anyone managed to finish it?
I can't beat the final level. I think I'm going to give up unless there's a trick.

One thing that's very weird about this game: when you upgrade a weapon's power or speed, upgrading it again will cost a lot more, but if you go play a stage then go back to the shop, the upgrade will be reset to a much lower cost. You don't have to finish the stage, just starting and quitting a stage will reset the upgrade costs.

Most of the upgrades are not worth it. Skip half the planes and half the weapons. Frag bombs are great, H bombs are awful.

The game doesn't have a lot of variety. There are only a few enemy motions and a few enemy firing patterns. The enemy graphics are arbitrary, there's no connection between appearance and behavior. The only substantial difference between the stages is the enemies have more hitpoints and drop more money.

The only problem is that the prices are too high. And spontaneous. But everything else is GREAT!!!!!

I'm 99.9% sure there is a shmup tag. If jay, the reviewer, or any other jig staff member happens to happen apon this comment and update the taglist, it would be greatly appreciated. Categories FTW

[We converted the shmup tag over to shooter a while ago. Thanks, though. :) -Jay]

To the game creater, if you're reading this.

Nice game, but I have some constructive criticism regarding game balance, and possible game bugs.

1) Possible bug: some of the weapons, notably the laser and the purple wave don't seem to have their delays being adjusted properly when you purchase delay reductions. I'd probably take a look at all the weapons just to double check.

2) Enemies should hurt you more when you strike them. With the 5th ship, I can kill EVERYTHING on level 15 by ramming it. I don't have to fire a shot.

3) Definitely a bug: Sometimes while purchasing upgrades, the game multiplies the next upgrade by four. Playing a level and quitting rests the problem.

Kudos for a generally fun game, though. I finished it once I picked up the 5th ship and frag bombs.

Games like this require an autofire option. Making someone spend several minutes at a time with their hand clamped around a mouse to hold down a fire button is unacceptable. I also don't understand the point of "badges" that won't tell you what they are for until you've earned them. After finishing the game there are several I didn't get. With no indication as to what they would be for they provide no inspiration to go back and try to achieve them.

No, seriously. I can live with the strange pricing, but going all the way to max out a weapon... and finding it downgraded on the next shop visit won't do. No no no, sir!

Also, the weapons themselves are weirdly balanced. As a matter of fact, the frag granades are incredibly more powerful than any other weapon, H-bomb included, simply because their destructo-level is multiplied by each bullet (i.e. a "40" power is in fact "40x25", or whatever number of bullets is onscreen). Also, fraggies work much better when shot sideways - so the best strategy becomes... just staying out of the way of enemies, minimizing the risk of being shot.

The hand-drawn style was fun, though.

Just a small note:
the "Comments, Questions about Notebook Wars?" link at the page where you play the game is wrong.
it should be 2010/09 instead of 2010/10.
Maybe something wrong while the day changed?

[Thank you for reporting this. It should be fixed now. :) -Jay]

Thoroughly enjoyed that line of the review-nicely done brad!

Might just be me but the lag on the mouse is irritating me completely!
i keep clicking on the ad banners on the side!
might be a great game but this is driving me mental and i can't carry on with the game

This game is terrible! It lacks everything that makes bullet hell games fun

Bullet hell games are fast because you have a fast ship, your ship is small so you can dodge projectiles, and you have a decent fire rate
this game lacks all those things, and the grind required to get them is definitely not worth it.

That was fun. I took a while, but I eventually finished all of the levels (and got all of the badges along the way).