It's the shooter series that turns "shock and awe!" into "shock and draw!" It's the arcade shoot-em-up where a lone pilot sets out to erase all of his foes... literally! It's Notebook Wars Saga, also available for Android and iOS, Francisco Ferreres' vertical-scrolling war game that shows us that the battlefield of the future will just as likely as not be some kid's fifth-period notebook (at least once he's finished covering it in ZOFOs and that Stussy S thing). After the conclusion of the Notebook Space Wars, we're back on terra firma, and while the engine is now Unity, the mission should be instantly familiar: shoot things and make them explode! 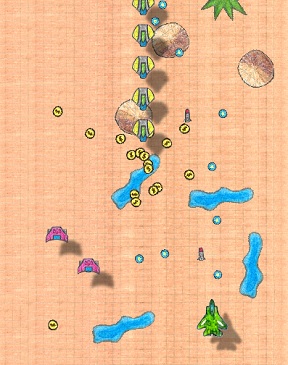 Click and drag the mouse to direct your spaceship, shooting enemies and avoiding their attacks. Defeated enemies will release coins which you can collect to purchase upgrades and new ships at your hangar between levels. You also have access to screen-clearing bombs that can be activated by clicking the button in the lower right of the screen. There are 15 levels to clear, each one giving you a ranking based on the percentage of enemies you destroy. Notebook Wars Saga is a bit of an odd mish-mash of old and new. The transition to a new engine with an obvious eye towards mobile releases means that a lot of the features fans are used to, like autofire, keyboard controls, variable difficulty levels and so forth are gone, which is a disappointment. On the other hand, even if the mechanics have returned to Notebook Wars 1 level, the game has never looked and played better, with the new engine finally shaking the lag that can plague recent flash-based installments of the series. In short, while opinions may split on whether it is a step forward or backwards for the Notebook Wars series, Notebook Wars Saga should definitely appeal to those shooter fans looking for a stream-lined approach or for fast fun on the go.

Let's see... all coins have the same value. You can't speed up the long, slow levels. The perfect bonus at the end of every level is the same 250 coins (so it would take about 40 of these to buy a decent weapon). Some enemies are the same color and shape as coins. Worst of all, you not only have to hold down the mouse button to fire, but you can't move unless you're firing. This definitely feels like several steps back from the earlier versions.

I am sorry but there is far too much of the old Notebook series missing to make this even vaguely playable on pc.

The lag between mouse and aircraft, no auto fire, no drops, no differing level difficulties, no distance meter, no keyboard shortcut for bombs. It just feels slow and laggy.

Really disappointing for me as I loved the others in the series and was quite excited to see this.

LOVED the first two, and usually love games upgraded to Unity -- but I'm with the others...there's so much stripped out of this one, it's now just another top-down shooter. There's nothing left of what made the first two so much fun.

(and I HATE grinding to get enough upgrades to actually play the game...a few rounds is one thing, having to replay levels 5-6 times just to survive that level gets really old, really fast)

Agree with all of the above. Obviously it's been altered for the mobile market, but it's come at the cost of browser functionality.

I'll be frank, I never really thought too highly of this series to begin with. Nothing done in this series ever matched or exceeded even the earliest games of this genre. You can find NES games of this sort that play 10x better. The big draw was the comic aspect of the notebook art...but even that was never really well done. Just a bunch of flying random shapes. You can still have notebook art and have it not look like it was drawn by a 2nd grader. Worst of all, the series has never been well-balanced. Halfway through, the challenge disappears, even on the harder difficulty. That's not a game, just a time waster. And in the few levels I've played of this version, it seems to be the same thing.

So now that the hardest part of the game is dealing with my finger cramping from the mandatory holding of the mouse button to move and fire, I'm leaving this behind. Still an interesting concept, but still a poor execution, and now it's crippled by the changes for the mobile market.

How do you upgrade your ship or weapon, short of buying the next most powerful one? You could "mod" your current ship with a more powerful magnet, engine, etc. in previous versions but I don't see that option in this version.

I'd like to thank the above posters for saving me 20 minutes of my life.

And that's the reason people are complaining. Because it's a shade of the earlier games.

Enjoyed the previous versions but this was HORRIBLE.

Along with the complaints everyone else has already pointed out, where the heck is the mute button?