The vertical shooter that turn scribbles into spaceship and doodles into Death Stars is back for another round in Notebook Space Wars 2, the latest in the Notebook Wars series. This time around Francisco Ferreres has you facing off against the forces of Rymulox III, who means to enslave the Earth with his pencil-drawn armada. So you know what that means? It's time to build a spaceship (SPACESHIP!) and start blasting all that needs blasting. Use the mouse or the keyboard to move, [F] to autofire and [E] to drop bombs, shooting space baddies, collecting gold to spend on upgrades between levels, and XP to unlock new capabilities for each of your ships. The levels are presented on a map with four difficulty modes to choose from (ranging from "slow" to "xtreme"). The map also features a hangar where you'll organize all your upgrades and mods. A new addition is the "arcade" mode, in which your ship is automatically upgraded as you collect XP, with no stopping between levels. 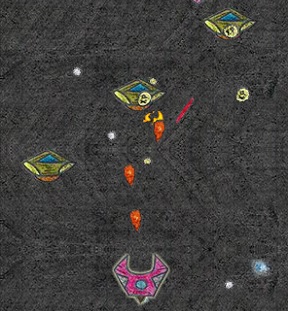 Notebook Space Wars 2 continues the series' trend of being a superior refinement of Notebook Space Wars, rather than reinvention. Perhaps this means we'll never be referring to "a revolutionary new installment of Notebook Wars", but a consistent upward trend in sequel quality is nothing to sneer at. Indeed, if I may be so bold, the customization and action of the series is starting to be reminiscent of Tyrian 2000, the holy grail of PC shoot-em-ups: no mean feat for a browser game (although Notebook Wars admittedly doesn't have the clever writing or breadth of environments that made Tyrian such a classic). Still, as polished as the mechanics have become, Notebook Space Wars 2 loses none of the "bored elementary school student sketching out an epic adventure" thrown-together charm that made the series so engaging in the first place, and it's definitely the best in the series... at least till the next one comes out.

Is it just me, or does upgrading weapons past Level 2 have no effect?

I will grant that this version is better than the previous incarnations, but I still have some major issues with it:
1) Stage Blandness: Whether it be the Asteroid Belt, Mars, Saturn, or Earth, I couldn't tell from the stages. It's all the same backdrop. Tip: Next version, work on your stages. No two stages should look alike, nor should they be repetitive within the stages. If I'm traveling to Mars, I want to know it. Start Stage 4 leaving that nebula, and finish it entering the Mars upper atmosphere.
2) Too Easy: I beat all the levels, including the Xtreme ones, without breaking a sweat. Weapons are far too overpowered, and enemies are predictable and don't fire enough. Bosses don't provide a challenge. Tip: Balance the game so that Hard is actually Hard, even with the best weapon.
3) Survival isn't Survival, merely Endless. After getting around $630k, the enemies stopped getting "harder" and reset to the beginning. I quit when I saw that. There isn't even a Badge to strive for, "Killed X number of enemies in Survival." Tip: Develop an algorithm so that enemies can increase in frequency, movement speed, hp, weapon strength, and firing speed as you go.
4) Epilogue: Where is the payoff? No "Congratulations, you beat the game, the Earth is saved!" no "Arrrrghhh, I'm dead!" from the Emperor, just a "You beat the level," same as all the others, and that's it. Tip: Ending cutscene. If we're going to play through the campaign, there needs to be a reason to do so, and that reason (since the beginning of time) has been the congratulations for a job well done. At the very least, give us a badge for completing the game, separate from the "Get all the Stars" badge.

Had fun but... What??? At least a small "congratulations" is in order. Or something to let me know that the game is over. Anti-climactic is an understatement.