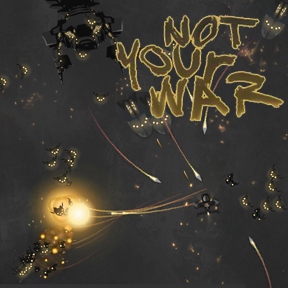 Don't you just hate being left out of things? Like finding out about a great party you didn't get an invitation to? Or having to sit on the bench during a game while your teammates do all the playing? Well that's how Ian Morgan, general of the Imperial Army of Planet Rhea feels, having been stripped of his rank for treasonous actions and told that the war is no longer his to fight. Of course, that doesn't stop him from fighting a one-man war against his Rhean superiors, and you get to accompany him in Pawel Lyczkowski's newest shooter, Not Your War.

Not Your War is a challenging vertical-scrolling shooter where survival is by no means guaranteed. You control your agile ship with the [WASD] keys and aim and fire your ship's cannons with the mouse. Later levels unlock new weapons and defenses, letting you use the [1] and [2] keys to toggle your guns, and the [spacebar] to shoot a swarm of missiles at the enemy. There are numerous enemy ships to deal with, from small pesky drones and fighters to large capital ships. Drones tend to fly at you kamikaze style, while fighters zip in and around your ship and are tough to hit. Larger enemies take much more damage, and they launch tracking missiles at you which can be shot by your cannons or defenses.

With the game's multi-directional shooting and numerous enemies onscreen, Not Your War often feels similar to Robotron or Smash TV. Like those titles, colliding with enemies often results in instant destruction, so success comes in accurate shooting and deft maneuvering. Thankfully the game has a decent ramp-up in difficulty, introducing enemies and unlocks gradually throughout its 11 levels. There's even an easy mode for people who find gameplay too unforgiving. Eventually you get into the rhythm of gameplay, casually targeting and picking off the swarms of bad guys and making controlled circles around larger ships, peppering them with cannon fire until they explode.

With its challenging gameplay and gritty back story, Not Your War provides a satisfying shooter experience. Despite having only one background and somewhat repetitive music, there's still a lot to like about this game. The ships are slickly detailed, and the shots and explosions look and sound satisfying. Gameplay seems a little short and the upgrades are a bit limited, but overall Not Your War dishes out classic arcade-style action. Don't be left out again! Give this war a try.

Play Not Your War

This game sure is pretty! good sound and music too. The story is also interesting.

But the gameplay wasn't that fun..

But yes, even the good aspects of the game have downsides. As the reviewer said, same music and same background..

Love the aesthetic, but agree with comments that the gameplay is a little boring. Controls are decent (mouse-control aiming can be tough on a trackpad, but works well enough here) but the pace is slow-both player and enemy movement feel a little sluggish, and there is WAY too much of a pause between waves.

I always like upgrade paths, but would have preferred a "store" model rather than upgrades awarded after beating certain levels. I got to the "Heavy Drove Wave" level, for which the game recommends a specific set of upgrades. I didn't have one of them, and since there's no way to swap or earn more until I pass that level, I'm pretty much stuck. I'm sure I *could* beat the level if I tried enough times and got a bit lucky, but at this point it's no longer worth the effort. If I could replay old levels to earn points/money to spend on other upgrades, it would add value and decrease frustration.

But enough negativity. Let me repeat that I LOVE the aesthetics here. Dark, atmospheric, simple color scheme. Nice vanishing-point perspective on the level select map. Beautiful 3D-rendered art for the upgrade screen. Enemies are easy to differentiate, even on a crowded screen, and show damage so you know which ones are easy targets.

There was some nice work on the sound, too. The music is generic and repetitive techno, but the in-game effects are great-subtle but distinctive sounds for each weapon, enemy hits, explosions, etc. I do wish the sound design for the menus was more consistent-the music from the intro, or from each level, cuts out abruptly whenever you enter a menu screen, and the menus themselves don't have sound cues.

The "gritty back story" had some nice animation in the intro sequence, but seemed to suffer from a lack of context. I was intrigued enough to want more-extra detail & character development-either in the beginning, or tied into the progression of the levels. As is, it felt like a good premise was just tacked onto the game.

So: lots to like, lots of room to improve. Here's hoping for a sequel/redesign that addresses some of these issues. There's enough promise here for a truly badass shooter.

Doesn't scratch my quick "need to blow stuff up with cool weapons" itch at all.

The "unlocks" upgrades are really lack-luster.

I played untill I got 3 different upgrades and none of them really felt worthwhile.

I found this game oddly addictive. There's one glaring hole in the enemy's military procedure that I can't resist commenting on:

Their favorite weapon seems to be drones that try to kill you by ramming you. The drones are relatively slow, and easy to avoid or destroy except when present in very large numbers.

The enemy also has fighter jets that can literally fly circles around you. The jets (mostly) avoid ramming you.

Why don't they put the same engines on the drones as on the jets? I mean, it would make the game unplayably difficult, but supposedly this is a war. They're not there to make things easy on you.

(I know, I know, stop looking for logic in an arcade shooter game.)

Could've been fairly enjoyable, except that the game froze up every half a minute or so, and I'd find myself on the opposite side of the screen with barely any HP left. Made the first general absolute hell to get to.

(And please don't say my computer is sucky, because it can run Crysis with almost everything set to very high).

That, and the upgrade system is quite annoying. Choosing the wrong upgrade means you are completely done for when the next level comes around - and you can't undo your upgrade, either. You'd think a programmer would know better.

On the whole I'm not too impressed. I came here mainly to say that I felt that too many things in the game are too slow. Someone beat me to it, but I'll give details anyway. The reload time for missiles is too slow. The fire rate for the heavy cannon is too slow, at least when you consider that there's no way to upgrade it. Maybe worst, your fighter itself is too.

On the other hand, some of the enemy fighters are very fast and agile, making it necessary to be quite quick on the mouse to keep up with them. This I actually find pretty refreshing. It is nice to have a challenge, with enemies that actually present a some challenge and require some skill to even hit. Too many shooters just rely on you moving your ship or your cursor left and right to wipe out the enemies.

What I mentally compared this to the most were the Drakojan Skies games. I would say that Not Your War is kind of like a mini version of the Drakojan Skies games. Those games did many things right. They were more realistic than a lot of shooters, had very nice graphics for free browser games, gave quite a cinematic experience, did a good job at telling their stories, were very fun to play without requiring massively overpowered, unrealistic weapons, and the difficulty seemed very high to me. This game actually feels a lot to me like someone liked the formula in those and some other games and tried to copy it, but basically came up short. It's OK, but there are just a lot of things about it that just don't feel right. In addition to all the slow firing and reloading and such, I was also pretty disappointed that by the end it still took two shots from the standard gun to kill the weakest enemies in the game. I think that's pretty close to unheard of for shooters like this, and combined with the huge number of the things protecting the bosses, it makes the boss fights a lot more difficult than I would have liked. Perhaps requiring money to upgrade the ship would have been a better way to do it. In any case, I really wasn't all that impressed by the upgrades in the game, or a lot of other things. I would say 2.5/5.