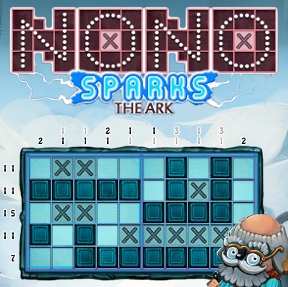 Building an ark? Don't forget your nonograms! Beardshaker Games has released another episode in the NoNoSparks series of picross puzzles with NoNoSparks: The Ark. Now, it's up to you to help build the ark that will save the world's animals (the animals you helped create in NoNoSparks: Genesis), all with the power of grids, pencils, and logic!

If you're familiar with the game of picross, you can jump right in, ignoring the tutorial windows the game uses to teach you how to play. Use the number clues on the sides of the board to figure out which blocks need to be filled and which remain empty. If you see "3 1", for example, you need to fill three squares, leave at least one square blank, then fill one square. Use the mouse to mark spaces as filled or blank, clicking on the icons at the bottom to switch between pen types (or holding the [spacebar] to temporarily switch). Once the grid is complete, a picture is sketched out and then added to the ark mosaic, dropping animals and various materials in as you work your way to a well-stocked ship!

NoNoSparks: The Ark features great artwork, something you rarely see in browser or mobile picross games. The interface is just about flawless, allowing you to quickly fill or erase squares without fuss. Better yet, there's no penalty for mistakes, nor is there a timer or any sort of scoring mechanism. It's just you and the puzzles, exactly the way it should be! Easy to play, satisfying to master, and with plenty of visual flair to reward you for being the puzzle solving master you already knew you were!

Works fine until you use the spacebar functionality, then the mouse has a mind of it's own and it's an unplayable mess. Maybe it's just on my end.

A little problem is that if you restart the level it solves it. Makes for an easy walkthrough:

It still has the game-destroying flaw of the numbers around the board immediately showing you whether you placed the dark squares correctly or not.

I don't understand why someone would go through so much trouble of creating a great presentation and then ruin the game completely by putting such a horrible feature in it.

Well baba44713, a warning about that is that in a couple of the last levels it did not actually work correctly anyway bit of a bug maybe unless I am missing something.

It's not a bug. Your third row has five squares instead of four.

I pressed enter for a new row and it submitted. Grrr.

To explain the above - the feature detects whether the dark squares are on correct places, so you can easily pass any level simply by filling out rows/columns until the numbers change. You do have to be careful not to put additional dark squares (which you did), but that's that.

This feature trivializes the accomplishment, and puts disincentive to actually take effort to get out of a hard spot. And even if you do not cheat, it immediately shows you if you made a mistake. It's a condescending and unnecessary feature which puts me off the game completely.