You don't need silly things like limbs to be a ninja, as long as you have a katana, mad stealth skills and some shuriken to throw around. Ninjas Never Die is a physics puzzle game in which you roll around collecting coins, cheating death and killing lots of spiders, giving all you arachnophobes out there a sweet chance for revenge. 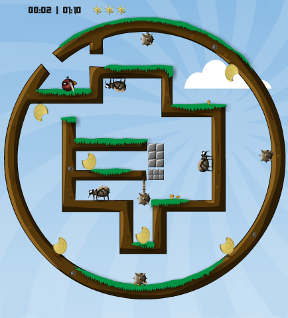 In all twenty levels (plus four bonus ones) your ball-shaped ninja has to go through a maze, but can only leave it after collecting all the gold coins in it. You move the ninja by tilting the maze either with the left and right [arrow] keys or [A] and [D]. The road is dangerous, beset on all sides with spiders and flails, which won't kill you (because ninjas never die), but will take you back to the starting position. At first you have nothing to defend yourself with, but later you can use stealth to sneak past obstacles, ninja stars to throw and you can even set yourself on fire. All of these powers have limited duration, so use them with care.

Ninjas Never Die is a treat for those of us who enjoy circular mazes. Tilting them with just enough power to get to the desired spot is an acquired skill, and it can seem frustrating or finicky at first. But there's something to be said for this type of physics puzzle: the meticulous movements and careful planning increase the degree of immersion and satisfaction when you finally beat the game. This particular maze puzzler is full of diverse, well constructed levels, and the ninja-based design is an imaginative idea which makes the gameplay all the more entertaining. So roll, little ninja, roll!