Ninjas have to have a place to live, just like the rest of us. They also have to have jobs and food and money and footpaths and cherry trees to look at. Fortunately, the simple life of a farmer ninja doesn't preclude raids on nearby towns, which is precisely why Kairosoft's mobile simulation game Ninja Village is so fantastic. 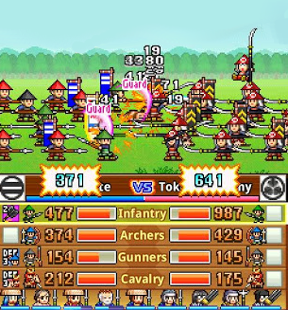 Ninja Village is split between two tasks: managing your village, and raiding neighboring towns. You'll spend most of your time sculpting the layout of your home by drawing paths to walk on, designating houses for newcomers to live in, setting farm plots and building shops or other amenities. It's all about making money so you can raise a larger army, conquer more territory, and outfit your fighters with the best tech medieval Japan has to offer.

From time to time you'll receive a tip that a piece of land is ripe for a raid, at which point you'll assemble a team of archers and melee warriors and dash into battle. You don't do much during these epic fights other than sit back and watch, but it's a grand sight to watch tiny pixel ninjas clobbering each other. Spend plenty of time working with your battle gear and training ninjas, otherwise you'll be the one on the run, especially later in the game when the clan wars get really serious.

Ninja Village is surprisingly simple for a Kairosoft game, featuring far fewer things to manage than we've grown accustomed to. The net effect is a game that's less involved than Game Dev Story or The Pyraplex, which is a slight letdown on one hand, but great news for casual players who just want a light taste of what a Kairosoft game can offer. The price tag is a little steep for a mobile game, and at the time of writing there's no lite version to try out, which will prove to be a barrier for many. But if you want a good, casual remix of a normally complex genre, you can't go wrong with Ninja Village.