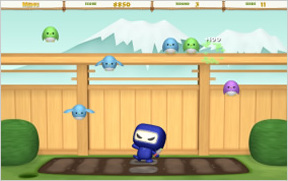 Ah, the humble ninja. Stealthy, wise and deadly. Everything I am not. Which is why I choose to play games that have ninjas in them. Much easier than actually becoming one. And most of the time you can pause for a quick break when you need one. Try doing that in the middle of a real life assassination. Bet you can't.

Either way, the first of these two ninja-themed games is Ninja Gardener, a Flash game released by Merciless Games. In this candy coloured offering, you are a delightfully plump ninja who has sown a small crop of just 20 seeds. However, before they have a chance to sprout, pesky birds begin to notice and attempt to get them. Sure, you could build a scarecrow to get rid of the birds, but that's not the ninja way. So, instead, kill them by throwing poisoned tipped spades.

Initially the bird attacks are slow and quite easy to defend against. Though the ability to only throw one spade at a time quickly reveals itself as being one heck of a handicap as, fairly quickly, the birds start to come down with near relentless determination. Keep your wits about you and use the bonus pick-ups wisely to ensure a favourable return on your plantation. 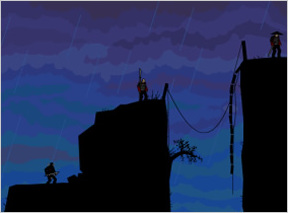 In a return to classic ninja stylings, Ninja Rinseout is a flash game from OneMoreLevel which features the black clad silent killer, leaping gracefully from rooftop to rooftop, ducking behind whatever he can and waiting for the right moment to strike; taking down the opponent with one deadly blow.

To save—whom I assume is the Emperor's daughter—you must travel through ten silhouetted landscapes, sneaking up on and knifing the guards. If you are seen, the guards will be briefly alerted and, though you are a stealthy ninja, a speedy one you are not and death usually follows you in combat. Retreat and wait for the right opportunity is your best bet.

Try as I might, I can't think of many ninja games reviewed here apart from N and Ninjaman. And while Ninja Gardner and Ninja Rinseout do have their own strengths and weaknesses, they're the only two games I've seen come around lately with ninjas in them. Although ninjas are not quite as cool as pirates (I think we can all agree on that), the availability of good quality games featuring them seems to be quite sparse. So, for a ninja fix, if you need one, please enjoy Ninja Gardner and Ninja Rinseout.

I can't get past the level shown in the screenshot.

It took me a while... But you can make that jump, there isn't any trick to it, you just have to launch at the very last moment. Keep trying, eventually you'll be able to run up the far side of the chasm before you fall offscreen.

Ninja Rinseout is a cool game but something annoys me.. I can't put my finger on it though.

I found Ninja Rinseout to be sort of difficult, but kept me entertained while I made it my purpose in life to beat it. It isn't an easy task...

But it is definitely beatable
http://www.whee.cc/images/grandmaster1.jpg

I think its because you can't jump that high...I mean, c'mon, your a ninja!

Can't we all just get along? www.ninjalovespirate.com

I disagree. Ninjas are so much cooler. :P I played Ninja Rinseout a while ago, wasn't very good at it. It was fun though.

the D key makes you back away.

Also, you can get grandmaster on select levels instead of just master. to do so, you have to backflip right before stabbing the person. the best levels to do it on is the first level and the fourth level

both are good, but my problem is that i like to feed the birds :) so did not like the first one :p

Hi, but wasn't Makibishi Comic a ninja game? Loved that one ;)

Gardener is kinda crappy. The graphics are nice, but the gameplay is seriously lacking. Also, killing birdies with switchblades seems somehow.. wrong.

I enjoyed "Rinseout" very much, particularly because of the silhouetted design. Sneaking into well-lit houses looked so cool.
My performance was less than cool; the rating was "awful" due to the many restarts, but I like to think of "awful" as "awesome".

Why can't I kill the lady at the end of rinseout? It feels incomplete without everyone dead.

Ninja Gardener is lame... Ninja Rinseout is very nice but too easy

Ninja Gardener was fun for a little while. The thing I think it needs most is a timer over each bird's head saying when it will attack. For example, two birds landed at the same time. I hit the one on the left, but the one on the right moved first and I lost a seed. WTF?

As for Ninja Rinseout, I think the jumps are not quite long enough, so it's too difficult to maneuver. Also, some things you think you can jump on can't be used for standing on. That should have been specified more clearly.

Other than that, they're both visually appealing games and I like them. :) Go ninjas!

I played through first try but it is kind of short. Also i only got awful in the last rating so im no uber pro

are you CRAZY!!! Ninjas are WAY more awesome than pirates!

Ninjas are MUCH cooler than pirates. Pirates are overweight thugs of the sea, relying on nothing but sheer numbers and brute aggressiveness. A lone, skilled ninja could take on an armada of pirates, given that the ninja could easily hide and murder using ranged weapons and assassination techniques as shown in 'Ninja Rinseout'. This has been proven in 'Dr. McNinja'. Meanwhile, a lone pirate would immediately be reduced to his basic components upon trying to raid a ninja hideout. Upon charging into a ninja hideout, he would see only the upholstery and furnishings. Then he would see nothing. Because the ninjas took out his eyes. With a teaspoon.

to beat the screenshot level like you said, just

jump on that tree in the chasm and then jump to the wall, its way easier