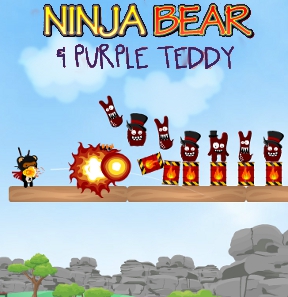 Rob and John Donkin have teamed up again! Ninja Bear and Purple Teddy thought they had those monsters under the bed safely locked away this time, but as is the way of all villains, they have escaped. Fortunately, rather than making a break to Acapulco via plane or boat, they have taken the "strange floating platforms in space" route of escape, and they docilely stand in place while you figure out the puzzle and use the power of physics to bring them to justice.

Switch between controlling Ninja Bear or Purple Teddy by hitting [S], and use whatever guns (hotkeys [1] through [6]) the level offers to aim with your mouse and shuriken, blast, bounce, disintegrate, or simply float away all the monsters, while avoiding hurting either hero. In addition to the game's main monster blasting puzzles, the game contains a fun hidden object bonus in the form of 24 yin-yang symbols hidden throughout the game. Simply click on a symbol to collect it. Once you've completed all 44 levels, consider trying out some user levels or create your own in the level editor.

Our bear heroes may be cute, but they're essentially whiny teenagers in cuddly form, more interested in getting to play Skyrim than saving the world, and possessing somewhat disturbingly deep voices which seem to speak only in memes. If that's to your taste, then great, but even if it's not, just mute the sounds (although don't miss the great original music) and play it anyway, because it's one of the best physics puzzles to come out in a while. The levels contain an excellent variety of challenges, from ones which call for timing, to tests of your aiming skills, to ones that require a little out of the box thinking. There are even a few levels with some wicked red herrings. And since three levels are open at once, if you get stuck on a level, you can always move ahead and come back to it later. It's really a game that has what players enjoy in mind, so take a break from Skyrim yourself and try it.

Level 5 - Say No to Gravity

After the monster falls down next to Ninja Bear, shoot it with the Shuriken (1).

& yes, it does annoy me that you have to be on Facebook to view the walkthrough linked to in-game.

-1 * for requiring a FB account to see the walkthrough. So uncool.

Level 5 - Say No to Gravity

After the monster falls down next to Ninja Bear, shoot it with the Shuriken (1).

JIG has a walkthrough just above the comments, so there is no need to go anywhere else to find one.

I made an awesome costom level in the level editor, but i cant figure out how to submit it. help!

First click the "Test Level" button to test your design.

After you complete your custom level test, a window will open where you can click "Save Level" to save your name and the name of your level.

You will need to create an Armor Games account to complete your submission.

Good game, but I can't stand the pop culture references. I have to mute the sound every time they do that "This is NINJA!" line at the end of a level because it's so dated it makes me cringe.

5,225 Views
0 Comments
chrpa— Jayisgames needs your help to continue providing quality content. Click for details Welcome to Weekday Puzzle! After several weeks we've got a separate Weekday Puzzle. First you need to help a small frog in cassovary's world which is being...  ...

3,512 Views
5 Comments
chrpa— Jayisgames needs your help to continue providing quality content. Click for details Hi! Weekday Escape is here! Two short Selfdefiant's are for the start, and then comes isotronic/Phix with an adrenaline escape from a burning hotel. There isn't any...  ...