Nightmare on the Pacific

It's the kind of choice you never want to have to make, yet you have to make it in an instant. You're at the scene of a disaster, and your loved ones are missing. The rescuers are saying it's too dangerous and they have to leave the area. Do you go with them? Or do you put yourself at risk looking for the ones you love? The heroine of Nightmare on the Pacific, a hidden object from Little Games, makes the latter choice. Join her in a modern day Titanic disaster as she searches a sinking cruise ship for her family. 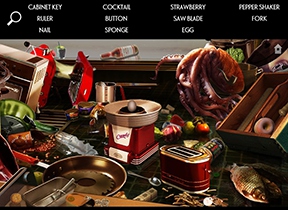 Being trapped inside not only a cruise ship but also a hidden object game, in order to find her family, the heroine first has to find a lot of random objects, like plungers, billiard balls, and apples. There are also some parts of the scenery in some areas she can manipulate, such as piling up objects to form a make-shift ladder. She also needs to solve some inventory puzzles (such as using a key on a lock) as well as some straight-up puzzles, because what cruise ship doesn't use light-up puzzles as a form of security? All you'll need to do these things is your trusty cursor and some sharp eyes to look out for little blue sparklies. If you want to get the happy ending of the game, you'll also want to keep an eye out for some more subtly sparkling objects. Gotta collect 'em all!

Analysis: Despite its flaws, Nightmare on the Pacific offers a pretty compelling storyline and a few truly clever puzzles (my favorite was one involving a curious fish). Without looking at walkthroughs, the game took me about three hours total. This is a game where the demo really reflects the rest of the game, so if the demo captures your fancy, the full game will keep it caged for quite a while.

And now for one of Nightmare on the Pacific's most serious flaw: scenes where multiple objects fitting the same description appear, yet only one of them counts. For example, a scene might have two cameras. You can click on the "wrong" camera until the cows come home, and you'll only be rewarded with that temporary loss of cursor control by which the game punishes you for what it thinks is random clicking. This doesn't occur in every hidden object scene, but it feels sloppy and lazy of the gamemakers when it does. There also appear to be two minor, non-game-breaking bugs which popped up in the transition from Collector's Edition to standard: first, the chapter icon in the upper left hand corner never changes, and secondly, you frequently have to manually click through dialogue. 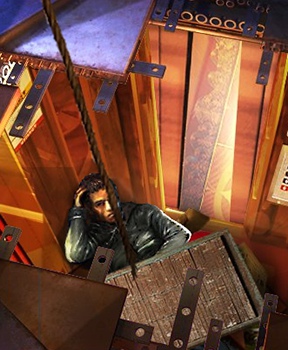 On the other hand, the game avoids two serious potential pitfalls completely: scenes that are too dark, and objects that are too tiny. If you're tired of games where you have to plant your face a centimeter from your monitor in order to spot a cigarette, or games whose idea of atmosphere is to pour a bucket of gray all over everything, your eye doctor will approve your choice to play Nightmare on the Pacific instead. The game does atmosphere really well in general, actually. You begin the game in a certain area, and when you have to return to that area at the end of the game, conditions are noticeably getting worse. This really helps in increasing the sense of urgency and danger. And let's not forget that unlike most HOGs, Nightmare on the Pacific has a legitimate reason for its hidden object scenes to look like a huge mess: you're inside a ship that has been rolling around (and in some cases, inverting).

Nightmare on the Pacific also has a truly excellent in-game map, available anytime by clicking in the upper right corner, and a useful feature for determining exits: simply hover the cursor at the bottom of the screen, and red exit icons will appear over all exits. Since you'll be doing a lot of traveling in the game, these features really help you to keep your bearings.

With only a few flaws to contend with, Nightmare on the Pacific is still an engaging game with an interesting storyline and some puzzles that really draw you in.

Nightmare on the Pacific - Walkthrough

Click the four corner lights first (doesn't matter in which order) and at last the light in the middle.

Chapter 5: Find a Way Out

Nightmare on the Pacific - Walkthrough

Click the four corner lights first (doesn't matter in which order) and at last the light in the middle.

Chapter 5: Find a Way Out

Who is the culprit?