There's nothing like a sultry summer night. The night air, just cool enough to be refreshing while still being warm enough to fall asleep in. The brilliant glow of the moon and stars. The gentle buzz of nighttime insects, using their superhuman (super-insectoid?) strength to carry giant boxes and colorful lanterns. Nightflies 2 is the sequel to Qribo's original 2012 puzzle game Nightflies, and just like it's predecessor, it's a super-chill ode to summer in physics-filled form. Your goal is to help the groovy, glowy nightflies carry the multicolored lanterns to the top of the screen. Just click on a lantern to send the bugs swarming towards it, and as long as three of the four flies make it to the bulb, they'll whisk it away. And if there's anything in their path? Click on the boxes, wheels, and other doodads to summon rope-bearing ladybugs to whisk the objects away! You can click and hold to aim the ladybugs and choose what direction they take off in, so make sure they steer clear and don't accidentally knock a lantern into a pit! That's all there is to it, but Nightflies 2 whips a lot of clever puzzles out of its simple foundations. 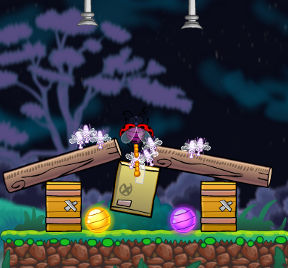 Nightflies 2 is minimalism done right. The game only has two core mechanics: Summoning ladybugs to pull and drag objects, and summoning nightflies to grab lanterns. But with only those two basic rules, the game brings quite a wide assortment of level types. Some are purely puzzle-based, where you must figure out the right order to do things with a limited number of ladybugs. Others are more timing-based, requiring you to summon ladybugs and flies in quick succession in order to grab the lanterns during the small window they're available. The way the nightflies behave is nicely intuitive... Their AI compells them to mostly fly in a straight line, which prevents you from cheating your way through levels, but has enough "give" that you won't get stuck on a level if the lantern they're trying to reach isn't perfectly exposed. Regrettably, the game doesn't explain your ability to hold down the mouse button and choose the direction your ladybugs fly in, which can lead to a fair amount of confusion in the early levels before you figure things out. Yes, it was explained in the last game, but that was in 2012, and otherwise, Nightflies 2 stands alone just fine. And the physics can occasionally be finicky, but thankfully, only a few levels rely on them too strongly. But despite its few quirks, Nightflies 2 is still a puzzler that stands out from the pack. With a warm, breezy atmosphere and its simple yet versatile mechanics, it's pretty fly for a night game.

Got it. Ladybugs can fly sideways.

It only needs one ladybug to pull the ball sideways.

I'm wondering if there's a more elegant way that uses all the ladybugs.

Solved Level 19 but game would not move on to Level 20. The bulbs are all in place, the clock has run out, and the fireflies are just idly flapping and waiting for the next level to show up.

Although I can play it from the levelselectionscreen!