Nicole, star of the appropriately named indie visual novel/mystery life simulation by Winter Wolves, has just started college. She's worried about her grades, finding her way around campus, keeping her finances in check... oh, and the frightening abductions taking place at her school. Several young women have mysteriously vanished, only to be found wandering the streets days later, confused and disoriented and without any memory of the incident whatsoever. But none of that has anything to do with Nicole... right? And how is she going to get all her homework done with all this foreshadowing looming over her? 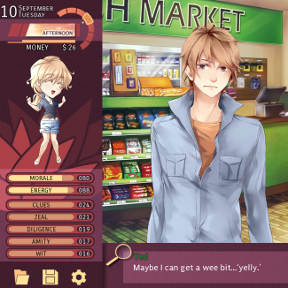 As Nicole, your job in the game is both to investigate the mystery and manage your various statistics. Both of these things are done by selecting different activities at the locations available throughout the day, while keeping an eye on your morale and energy. Of course, you don't have to investigate the mystery if you don't want to, and there's a lot going on around campus if you know who to talk to. At heart, Nicole is primarily a romance game, with an emphasis placed on raising your relationship with at least one of the eligible bachelors to get the best possible ending. If you're not into guys, be patient... a version of the game with lesbian relationships is on the way! The choices you make in your interactions with your potential romantic interest determine their attitude towards you, but each one also has a specific statistic that's most important to them, and figuring out which is which (as well as raising it to a whopping 900 points!) is the key to getting the very best ending, like no one ever was. 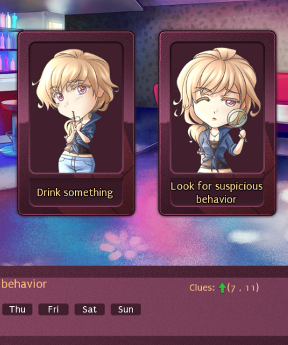 Analysis: Nicole the game is as friendly and fresh-faced as its protagonist, with a bouncy energy that rides alongside and appealingly creepy subplot. Although all the characters may be well known archetypes (the womanizing jock, the painfully shy nerd), they're written with charm and a refreshing amount of depth to round their characters out. Surprisingly so, in fact, as at least once the plot threw me an unexpected curveball with someone I thought I had figured out from a mile away. People turning out to be more than they seem to be winds up being a core theme of the story, and the game is great about subverting your expectations over and over. Nicole herself also makes for a likable and happily realistic protagonist... neither too perfect or too tokenly flawed, and frequently funny to boot.

The biggest problem with Nicole might actually be that the game is so painfully slow to start doing anything with the mystery that's supposed to be one of the central themes to the plot. If you're more interested in the thriller aspect, watching Nicole wander around campus making meme-tastic references and flirt starts to get a little frustrating simply because there's so much of it compared to the mystery subplot. While it's true these elements are intrinsic to the visual novel otome-style gameplay, you would think the kidnapping of young women would be a much bigger deal than it seems to be to everyone. Thankfully, a lot of this is mitigated by an interesting and varied cast, and balancing Nicole's statistics is easily done without having to fight her morale and fatigue. It makes for an accessible yet engaging experience you can sink into and enjoy the plot and characters without having to struggle with numbers. Once the game starts adding in job opportunities, raising Nicole's statistics goes a lot faster, and the story scenes come thicker.

Nicole isn't what you'd call a difficult game, with the biggest obstacle being grinding your statistics up. But though its pace is slow, the more time I spent with it, the more I found myself enjoying it... which might be some sort of weird case of life imitating art since that describes Nicole's relationships with most of her male leads. Most of the story choices primarily revolve around picking the right option that will make your love interest like you more, and it would have been nice to have been given some more freedom to steer certain events instead. Still, if you like mysteries and your cast of characters varied and quirky, Nicole is definitely a visual novel that should be on your list to check out. With people you'll want to get to know and a healthy dose of humour, suspense, and surprises, it's the perfect choice for sinking into for a long time. You won't want to put it down, and that's a rare pleasure.

This game is fun and all, but I don't really want to pay $20 for it. It has such a slow pace that Day 30 was the first part-time jobs were even mentioned, and without money a lot of the features aren't usable. The stats build ridiculously slow, and the choices are limited. Also in the first 30 days, NOTHING about the mystery was revealed. I played this because it was supposed to be mystery/horror...would be great if it was just a little shorter and free.

This game is awesome! But it is a bit slow pace. Anyways, I am an artist so I understand why this cost $20. It took a lot of effort to put this together didn't it? Plus, I understand the concept in making a game. = w = I think it is worth the price. Jobs appear after a month. It's no biggie. I hardly spend any money. In fact, you can take it easy and not spend a single dollar! I like to speed things up though so I brought gifts to feed my relationship xP The gifts do not go over $100 so it's fine. :3 hay even just the trail is awesome.

I think that there should be a auto-save at important pin points like after the trail ends(1 month), and the "You're the fourth" message. :3 Because I messed up in the game and I don't like my ending. I don't want to restart the whole thing. Also, you should put in more scenes... It can get pretty boring.

I take back what I said about the scenes :P
It's fine. It just pops-up depending on my choices in the game. I played it again and now I get scenes like, everyday. (ok maybe not everyday but sure felt like it.)