New, free and mobile versions of VVVVVV and Super Gravitron!

News bit number one: VVVVVV is on iOS and Android! News bit number two: Super Gravitron is also on mobile! Special bonus third news bit: Super Gravitron is free! Terry Cavanagh delivers a simultaneous bounty of ultra-challenging platform and arcade gaming entertainment for just about anyone with a touch screen device. All we can do is nod our heads and in great appreciation. Just before downloading both games. 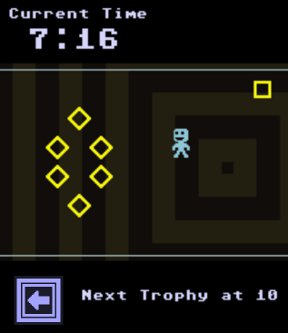 VVVVVV is the indie hit from 2010 ported over with flawless virtual button controls. Seriously, they really are fantastic. The platformer plays well even without physical buttons to mash when you die for the 87th time. All of the levels, music, retro artwork and painfully difficult gravity-flip-falls are intact, just waiting to frustrate you all over again. As for Super Gravitron, the mini-arcade game plays a lot like Super Hexagon, only with a VVVVVV character bouncing up and down while you slide him back and forth to avoid moving projectiles. One hit and you're dead. So... don't do that.

Oh, and here's a bonus you might not have expected. Newly released for PC, Mac and Linux is VVVVVV: Make and Play Edition. It includes player-created levels along with the level editor to craft your own, setting the tools free for the world to do with them what they will.

Speaking of VVVVVV's music, composer SoulEye recently collaborated with FamilyJules7x to release MMMMMM, an album of metal-mixed VVVVVV tunes. Yes, it's as good as you would hope. Pushing Onwards has never sounded so epic.

But that's not all -- The level editor is free too!