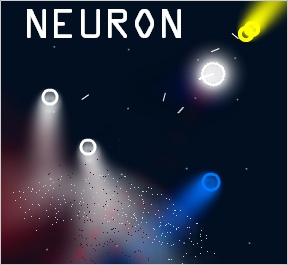 Someone out there is making a fortune off of these inescapable boxes. Between arena shooters and room escape games, this is probably the only business growing in our economy. Neuron Is one of the latest additions to the ever growing army of Geometry Wars clones. In case you aren't familiar with the concept, I'll fill you in: everything wants you dead. Enemies spawn around the arena in waves, and your job is to kill them dead before they do the same to you. Move with the [WASD] keys, aim and fire with the mouse, drop bombs with the [space] bar. Kill or be killed. Seems simple enough right?

Not quite. Neuron provides all your standard GeoWars enemy types, from the simple "moves at you slowly", to the "faster than you could ever hope to be", and let's not forget the classic "dodges your bullets so you better trap it before it kills you". Okay so maybe they spent a little too much on their inescapable box, and not enough in the naming department, but they've got a few new types of enemies up their proverbial sleeves too. Unlike in GeoWars, some of these bad guys shoot back, as well as being able to take multiple hits.

Your enemies aren't the only ones that have had some upgrades though. For each enemy you kill, you will get some data points you can spend on upgrades like improved fire power, additional health, or a faster ship. You can also buy extra lives and bombs. On top of the upgrades you also unlock perks every few levels, which can, among other things, make your ship smaller, regenerate your health, or make your bullets explode on impact. And for those of you with a burning desire to accomplish everything there is to offer in a game, there is also a set of achievements to be earned.

Analysis: Although there seems to be a veritable smorgasbord of similar games out there, Neuron manages to feel fresh and new. The stylized particle effects make looking at the game almost as much fun as playing it, although some older machines may have to turn the effects down to run the game at a decent rate. Although it's a little on the short side, the perks and upgrades keep this game from fading into the crowd of other arena shooters. For those of you with OCD, the achievements will add some replay value to the game, however it would have benefited greatly from an endless mode. The game does a great job of being what it is, a short fun shooter that will help you be slightly less productive than normal. Excuse me while I go invest in some of those inescapable boxes...

Pretty sure none of the enemies are faster than you are, at least not if you upgrade speed occasionally. This one's really easy, but fun while it lasts.

Mildly fun to the point where just too many homing circles appear at once and when you try to evade them, you keep bumping into more spawning circles ... that's where I abruptly lost interest.

I have to agree with neotiger on this one. When you go from a mildly-challenging level to a dang-near-impossible one I'm no longer interested in anything you have to offer.

Maybe ensoul is right and I need to try again upgrading speed instead of firing.

I found it wasn't too bad with a mix of the three upgrades, also don't forget to use your bombs.

The tiny perk also helps. Note that you have to activate perks once you have them, and you only have so many slots; if they're not green, they're not on.

The idea is okay, and it is quite visually appealing. The only thing I think would make it better would be to increase the density and speed of the particle effects. I like to see LOTS of particles, fly way across the screen when something explodes.

It got pretty simple once you upgraded everything and you could only use money for bombs and lives. Final score: 5818

does anybody knew that there is an ending in this game? after enduring seemingly endless rounds of enemy waves the boss will appear... it is a big multicolored circle that fires green beams and continually summons yellow homing circles... defeated it yay! :D final score at 6330