Neonball by Retrom is an arcade physics game coming straight from the dystopian future, where the only way to enter Neoncity is by proving you can bounce a ball around a room. Sounds cool, right? You start out with the ball moving along a blue laser; you can launch it with the [arrow] keys or your mouse, and it will only stop if it reaches a blue laser again. Your job is to get it safely to the exit point, avoiding mean orange thingies such as lasers and bombs. There are two challenges for every level: collecting all three stars and the time challenge. Stars are sometimes deliberately placed in the direction opposite the exit, meaning you'll have to bounce your way to them and back without dying once. The time challenge is a (quite short) length of time you have to beat. Luckily, this simply means reaching the end of the level as quickly as possible, without having to stop for the stars. This may sound easy, but wait until you finish the first ten levels or so. 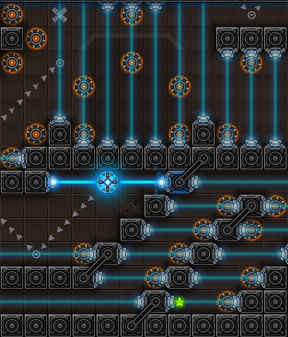 Neonball gleefully ramps up the difficulty early on, putting your reflexes to the test. At times it has a pinball feel to it, what with all the bouncing and the carefully calculated launches, but you'll also have to think ahead and make decisions in a split second unless you want your ball to go boom. If you don't have the patience to replay a level until you get it right, this might not be a game for you, as it does call for a good amount of precision and swift reactions. But Neonball is so well executed – graphics, music, design and mechanics – that it's a joy to play, even if, at times, it could look like it was made specifically to mock your motor skills.

Pretty to look at. For me, the controls are hard to get used to, particularly in instances where very quick timing is required. I've given it some effort, but this one's not for me.

Controls aren't great. Timer on some levels needs to be removed as it's BS. Don't put out mines unless we can shoot them.

I just smushed this game and it gave me a proper headache. all the stars, all the time trials and the boss took about a week.

Love this game, it's been made with care, but the neon city is a lie and i can't find the keen secret.

Upon completion of the boss the neon city becomes a button on the level select, provided you have a full star and time-trial roster.

Disappointingly all that you get is a crisp animation of the neon ball and then a signpost telling you welcome to neon city. The bottom of the sign bears the code #88764211465230 but it doesn't correspond to anything on twitter. I don't know how to get closure on this game. Can anyone help?

Not bad. But kind of hard. I couldn't get past level 9 I think it was.

arrrg! no save feature? or did i do something wrong?
went to level 10 before work this morning... left the game up in my browser but it asked me to reload when i got home and sent me back to the beginning :(

That really sucks :(. I have no idea what the issue is, but it saved my game quite nicely.

After the ad, I had a blank black screen and nothing would load :(