It's the end of the world as we know it, and you feel fine. Of course, by "fine" I mean "You woke up confused, disoriented, and barely closed in some sort of dilapidated cryogenic facility being stalked by some sort of beast monster, and the world outside is hostile and in ruins where other bedraggled survivors will stab you with a broken bottle for a Twinkie, and you may die of hypothermia before you can even find out what that mysterious glow on the horizon is." But other than that, totally fine. Blue Bottle Games' NEO Scavenger is a brutal post-apocalyptic indie turn-based survival adventure, with a bit of a rogue-like flair. As you begin the game with nothing more than the hospital gown on your back, and a strange talisman around your neck, you're cold, weak, and very, very vulnerable. You don't know what's going on, or really even who you are, and the entire world is out to get you. You'll explore a huge, til-based world turn-based style, scavenging for supplies when you can, while at the same time coping with hunger, thirst, the elements, and the creatures and characters hunting this strange new land. You may get lucky and find a ratty old shirt and a single shoe in some ruins, or you may get stuck in a hole. You might be able to craft traps, weapons, and other useful items, or you might be attacked by a cultist and left to bleed out. Will you ever find out who you are and what happened in the world? Or will you die an unknown... or be manipulated by forces far greater than you? After years in development, NEO Scavenger is an impressive, deep, and engaging survival simulation adventure who rewards the patient and the clever... but also sometimes just caves your head in. 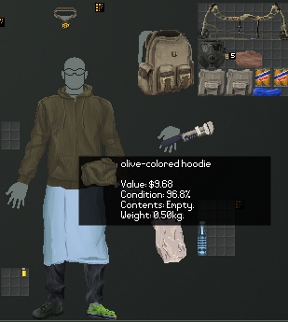 At the start of the game, you'll be tasked with creating your character by selecting various beneficial traits, such as botany skills or a hardy metabolism, but you can only take as many as your points allow, provided you aren't willing to offset one of them with a flaw like myopia for an extra point or two, of course. Most of NEO Scavenger takes place on the world map, where every location is represented by a single hex-shaped tile. You click to move to different spaces, with the moves you have left per turn represented in the upper-left corner above the bars that keep track of everything from how cold it is, to how hungry or tired you are. Every location is different... towns have buildings you can scavenge in, for example, while a forest could hold water, edible (or poison!) berries, wood, and more. Your available actions are located on the right side of the screen, and each one will be valuable to you. Hiding your tracks may take a move, for instance, but it can keep enemies from following you, while choosing to run consumes more movement points but can get you farther away from a threat.

Scavenging is likely going to be something you spend a lot doing. It's right there in the title, after all. When you choose to scavenge, you'll be presented with a screen that shows any locations in your current area you can search in. Doing so is dangerous... you can make noise that attracts attention, or get hurt on debris, but you'll need to take the chance if you want to survive. Loot represents your chance of finding things in any location, while Safety represents your likelihood of getting injured, and Sneak is how careful or quiet you are. These bars can go up or down depending on a lot of factors, and if you're carrying anything that may be helpful, you'll be given the option to use it. A lighter may shed light and thus make you more able to spot loot, but it'll make you easier to spot too, and a mechanic could pass through a location safely, but at the expense of missing out on potential items because they're too busy watching for pitfalls. If you do find something, it can be literally anything... clothing in any state of decay, empty containers, scraps of wire... nothing in this world is really trash, even if it is literally trash. Most items can be crafted into something else (you'll find recipes everywhere), and others can have additional use, like pants that provide you with pockets to carry things, or a plastic bag to use as a backpack. What you can carry is limited not only to how strong you are, but also the space you can fit things in... different items have different sizes and shapes, and you'll need to organize your inventory to fit what you can. 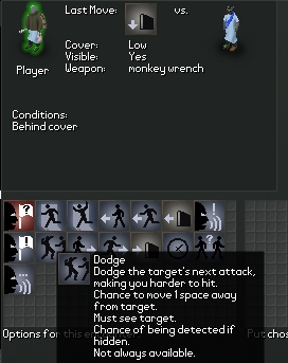 Like exploring, combat, if someone comes upon you, happens in turn-based fashion, but on its own screen. All your available actions are on the left, and you and your enemy both act at the same time. What actions you have at your disposal depends on what you have with you as well as what perks you chose at the start of the game... you might be able to scare an enemy away by threatening them with your weapon, or you can execute a complicated attack or a headbutt if they're close enough to you. Not every encounter has to end in violence, and you may have the option to talk to someone who could be just as scared as you, so don't lunge at someone just because they don't know you're there. Hiding is also an option, and if you're out of view, you may be able to sneak away. Combat is always dangerous, however, and you can find yourself seriously injured in a way a rest won't fix, so always be cautious unless you're confident in your abilities... both as a fighter, and as a medic. Remember, it doesn't pay to be reckless... you can only save if you quit the game, and if you die, you're dead for good and can only start a new game. 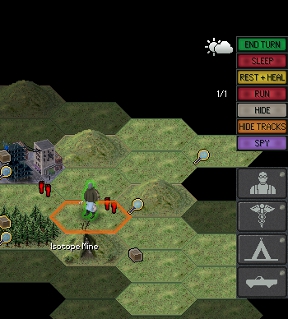 Analysis: Some games hold your hand tenderly and walk you through every single aspect until you feel confident. NEO Scavenger hangs in the back and shouts a few basic tips while you frantically figure out how to fend off a feral dog with a plastic bottle. Most of the mechanics are fairly intuitive once you've fiddled with them a little, but even when you know the ropes, it's still an absolutely relentless game. The odds feel like they're always stacked against you, and you'll probably get intimately familiar with hypothermia your first several attempts at playing. High difficulty isn't a bad thing, but a point some players may find hard to swallow is that NEO Scavenger's randomized loot system means how well you do can be entirely up to chance early on if the game doesn't decide to grace you with decent clothes or anything you can use as a tool or weapon. For the most part, whatever random number generator that handles payout for scavenging doesn't really feel unfair, but some playthroughs are definitely going to be a lot harder a lot quicker depending on what you do (or don't) find in the beginning when you have nothing.

Despite its seemingly malicious difficulty, however, NEO Scavenger is still seriously compelling and addictive. A lot of the story is left to what you can find in old newspapers and the like, painting a picture of what the world was like before and how it came to be now, but there's still a very distinct main narrative for you to follow, even if it'll likely be some time before you make any progress in it. A lot of the gameplay comes down to trial and error as you figure out what works best, what's valuable, and what'll give you diarrhea. For some people, that's a plus. ... the "learn as you go" aspect, I mean, not the butt stuff. The world feels dynamic and dangerous, but it also compels you to explore and learn about it. Combat initially might seem slow and confusing, but the more time you spend with it, the more it shines as you learn the ropes. It's thoughtful, strategic, meant for planners, and the right combination of choices can mean that just because you're not as strong as your foe doesn't mean you can't take them out hard.

The menu navigation on the whole will probably take some getting used to, and honestly it feels a little clunkier than it needs to be as you swap items around for camping and so forth. Still, NEO Scavenger is well worth the effort. Its flexible gameplay allows you to play the way you prefer, whether it's sneaking around, hunting wildlife, or bashing your way through obstacles, with a myriad of options available for almost any situation depending on your skills, items you're carrying, or whatever you might have crafted. Brave an abandoned isotope mine, probe a toxic swamp, come to the rescue of someone under attack, or search for the lights on the distant horizon. It may be a little hard to get into for some, but it's absolutely hard to put down. Smart, polished, and packed with replay, NEO Scavenger is an easy recommendation.

The best inventory system I've seen in a game so far.
Everything is well thought out to the the smallest details.