Playing DrawManEater's point-and-click adventure Nekra Psaria is weird, mostly because Nekra Psaria is really weird. And surreal. And sort of disturbing. It calls itself an escape game, though that might be only in the loosest sense. See, you're watching television when your generator quits on you, and you need to find fuel for it. You know this because your generator is an enormous talking head. It is at this point you might find yourself channeling Mabel Pines as you nervously chuckle to yourself, "What is haaaaappening here?", but you'll have to press on and explore one seriously strange city in order to win. To play, all you need to do is click on zones that highlight to show you can interact with them. If you need to use an item from your inventory, just click it at the top of the screen, and it'll automatically be used if you're in the correct location. In some cases you can find notes scattered around to help you figure out what to do, or a character might tell you what they want, but largely you're left to explore on your own. Search every scene and every angle, pay attention to your environment, and tell me I'm not the only one who suddenly feels like it's the nineties and we're watching MTV Animation again. 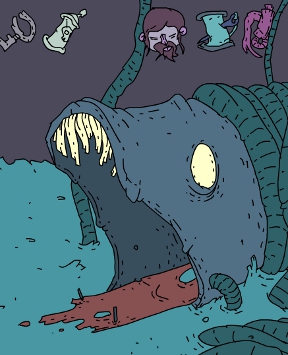 When I tell you Nekra Psaria is weird, I need you to imagine me grabbing you by the shoulders and saying it in the tone of voice generally reserved for the call is coming from inside the house. It sort of feels like Mateusz Skutnik by way of Eric Fogel and the sort of dreams you only get when your fever's spiked. The environments are all dirty and carry a vague sense of unease, and the characters are just as unsettling. It's rare that the game wants you to do something as straight-forward as, say, collecting water in a jar and giving it to someone who's thirsty, but somehow the game actually manages to be surprisingly intuitive despite its setting. It helps that you don't have to go on a pixel hunt thanks to the interactive highlights, and the automatic item use if you're looking at the correct screen means it's easy to find out if you're on the right track rather than hoping you're clicking on the precise spot other games might require. It's not a particularly long game, and it ends on an unexpected cliff-hanger, but weird and creepy as it may be, Nekra Psaria feels like it has a lot of potential, and it's something we'll look forward to seeing where it takes us in the long run... even if that means we'll be looking askance at it the whole time.

...well, that was interesting. And I managed to beat it with no assistance. Got stuck once or twice, but only briefly.

Haha. This is something else. Didn't take me very long to solve it, and I never really felt like I was stuck. I had several correct hunches on what I needed to use, and one such hunch that allowed me to forgo looking at the clue again because I don't have a photographic memory. Apparently I operate very well on fever dream logic, and I don't know if I should be concerned about that. :P

That. Was awesome. I did momentarily miss a

Fishy fishy! That hit of violence was also quite satisfying.

Hmm... So there's no way to combine things, right?
I seem to be stuck.
What I possess and have not used:

a board, a severed head, a needle and thread, and some sort of pink thing (a scarf? some guts? I have no idea what it is).

Never mind, got it. Pretty much went to every single scene and clicked everything in my inventory until something worked. Then I realized I should have figured it out from a clue...

the clue for the perfect guy is a picture of him with a board on his face. :-O

Heh, fun game. Don't think it needs a walkthrough.
I like offbeat or unusually creepy things, so this was a treat for me.
I actually kind of liked the slightly dodgy translation because it made the game feel all the more foreign. The art was fantastic, almost like Dali sketches but darker.
I would love to see a part 2 as well.

Oh, that was great. Whatever it was.

There's a couple of lovely Dr. Seuss moments in there!

That gives me a happy. It's just delightfully strange, artfully odd. It's not weird, it's deranged. Here's hoping whoever made it does continue the story.

Apparently, some items have more than one use. Just needed to chime that in.

I enjoyed the game and thought the animation and navigation was good. My only complaint is with the item usage interface. I would have preferred if you had to drag an item onto an object to use it, rather than just clicking on the item. The way it is now makes it so that you don't need to actually try to figure out what to do, you just need to click on each inventory item on each screen and eventually you'll win.

Very well done. Had a bit of trouble

finding the knobs on the stove in the Fuel Store. a bit too small of a mouse-over area for that one.

Aside from that, it was a well-designed, surreally beautiful point-and-click adventure.

The language of fish.

looks like a cool game. I hoe a walkthrough is in the works.

Not bad, but I far prefer Skutnik... and YES it did remind me of MTV Animation! (*cough* old *cough*)

Too much back-and-forth -- lots of screens between where you found something and where you used it.

Found a video walkthrough, and honestly it plays better as a video!

This was an interesting game. I liked the navigation and the use of items. My problem was that I was unable to recognize what some of the items were so that I didn't know where to use them without trial and error. Labels would have helped.

It's impressive how the scenes are so sparse, but I've still not managed to find the board. Where is it?

ooh what an interesitng game! this was difficult because it was kind of off-kilter, but it's actually quite simple and intuitive.

pick up the board that falls when you open the boarded up door.

Oooh, this was quite fun! I enjoyed exploring and interacting with this almost-disturbingly strange world. :)

This flowed so easil. The clues being both simple and weird made them easier for me to remember or something. Also, knowing what item to use (to me it was like putting fairly obvious puzzle pieces together) was largely highly intuitive. Looking forward to the next one, though I don't even normally like this kind of atmosphere. (Despite *ahem* also having watched those MTV animations...)

What was the reason for the train like thing (that flew through the sky) and the person you watching it? I felt like there was something to do there, maybe an optional task for a different ending?!

If you find that to be the case, then by all means do say something. I only remember that train because it scared the bleep out of me the first time I heard/saw it coming. I don't think it was supposed to be a jump scare but it may as well have been one for me. I figured it was about the "ambience." :'D

Here's a walk through of this game.

5,408 Views
7 Comments
chrpa— Jayisgames needs your help to continue providing quality content. Click for details We escapists got our first Christmas present, a new game from Masa - and it's great! You find yourself in front of an elevator, which you'll get...  ...