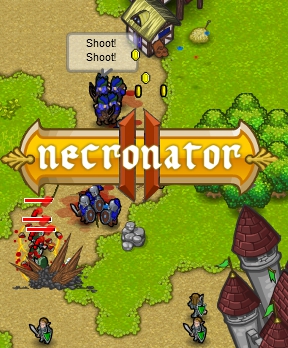 War. War never changes. Well, until the orcs get involved... and the undead... and the elves... and, well, I guess war changes a little bit more than you might expect in Necronator 2, a real-time strategy game with tower defense elements from Toge Productions. In this sequel to the original Necronator, the titular dark lord you controlled in the original is back! It's your job to show him what happens to dark lords (hint: it's not tea and cookies.)

The majority of the action is controlled with the mouse, though it's much easier to scroll around and keep track of what's going on with the [arrow] keys. Make sure you grab the money your defeated foes drop with the mouse as well! Your goal is to claim the enemy's castle at the opposite side of each stage from your own. You battle your opponents by building units which are then largely automated and will march towards the opposing castle, dealing with any baddies or enemy structures they find along the way. While you can give basic orders to charge, halt and retreat, your units generally do a pretty good job of taking care of themselves so you're largely there to deal with the bigger picture of the battle. There's a variety of ranged and melee combat units available, plus you're also able to cast spells to help out more directly and upgrade your units and magic between fights. After each battle, you can spend "shields" you've earned from victories on things like unlocking new units, applying upgrades, purchasing spells, and more. If you're struggling, you can always choose another difficulty setting for each stage.

The graphics are well-defined and clear, the sound certainly works and the gameplay is plenty of fun, but perhaps the most interesting aspect of this game is the creators' promise that it will be updated on a regular basis. While right now you're only able to play as the human faction, more factions are promised along with new spells, hero units and levels. Even with only the Human faction available at the time of this writing, however, Necronator 2 is still a solid, straightforward RTS packed with a ton of different stages, units to unlock, spells to try, and bad guys to fry that's worth your time.

Is it just me, or is anyone else getting stuck at "Loading Config"?

The game doesn't start; It gets stuck in the middle of "Loading Config".

It works correctly if I play it on ArmorGames' website.

The game was loading fine yesterday when I hosted and tested it.

I guess you'll have to play it over at Armor Games until the developer gets back to me about it. The links in the review have been updated to point to AG instead.

Worked great for me though i am using google chrome.I have not had any problems with game at all.

If you misclick when you want to order an attack, your units will stop attacking and move to a destination. Since units also deselect when you issue an order, this means that you can't cancel that move order and all those units are as good as dead.

I can't figure out what the drag-select box actually selects, but it certainly isn't "everything inside the box".

This is a disappointing sequel, if it can even be called that. And this game copies a massive amount of features off of kingdom rush.

I can't believe they ditched the nice pixelated graphics for making it look like Kingdom Rush :(

Why is this called "Necronator 2" if we don't use magic and the undead, like "Necronator"?

Disappointing game. 1. Control over units is just terrible. I'd rather be able to select squads and direct them to certain places individually. 2. Difficulty is imbalanced.

I'm a bit disappointed by this game as well. I was expecting something more like how infectonator or the original necronator would work. I loved the gameplay and the originality of these two games, I just wish they could have continued it to the sequel.

Although hesitant, I still played the game, but I'm more disappointed at the controls and the interface.

Unit pathing is bizarre -- I've seen unit walk straight across the 'keep off the grass' grass, ignoring the paths described in the minimap. I've told units to move to a waypoint, along the shorter of two paths, and watched them move a little ways in that direction, then turn around and start marching away from the waypoint to take the long way around.

I've also had the game seize up many times during matches, where all units stop moving/fighting, and I can move the map texture around but the units stay in-place relative to the window.

Why oh WHY do I have to pick up the gold after killing the baddies??? As if I don't already have enough going on to keep track of??? And why does it deselect the troops when I click on where I want them to go? What if I want them to do something else right away? Why do they wander around lost and confused for a few seconds after I tell them where to go?? Why do they keep standing still after I tell them to move forward again? Why in the samhill does the whole stupid game FREEEEEZE and pan over to the baddie's castle when they make a hero? I'm WORKING here dagnabbit! Leave the screen alone! Why are there only 107 shields available? What if I want to upgrade more stuff??

I played a few levels, made it to the third country, and quit in frustration.

There is a really nice upgrade and experience system here. Plus a pretty decent mission path. Held back by one of the worst interfaces I've ever seen in a game. The clicking on coins (which may or may not even be necessary? It's hard to tell) will likely send my forces off in the wrong direction. Telling them to stop doesn't always make them hold position. Sometimes I click on the outside interface, and I can't find any way to navigate the zoomed in map to replay missions.
As is, it's not worth playing, really.

For all off you who are complaining about picking up coins, it isn't nescessary unless you want the money quickly. The money gets picked up after about 2-3 seconds anyway. It's a very god game nut to similar to Kingdom Rush.

Simple game. Grenadiers are the best