Realtime strategy was rarely so cute as in TruTruka's Nano Kingdoms, and luckily for you that itty-bitty kingdom couldn't stay saved because that means we get another opportunity to indulge in some seriously fun and flashy defensive gameplay. In Nano Kingdoms 2: Joker's Revenge, the royal family has been abducted by one creepy clown, and it's up to Glenn, our adorable hero, to learn the ropes of warfare and recruit an army of legendary warriors to make the land safe once again. Awwww, lookit you! Who's a bwave widdle hewwo? Is it you? Izzit you?! Yes you is! 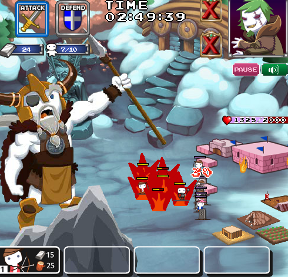 As you progress through the land, you'll encounter various heroes and villains that need to be stomped before you can proceed. You'll start on opposite sides of the battlefield and need to raze your enemy's headquarters to the ground before they can do it to you. Naturally, this means you need to build an army, and doing so means purchasing upgrades for your castle, like a farm to provide food (an army marches on its stomach!), a foundry to make metal, and so forth. If you want more powerful units than your simply stabby soldier, you'll need to amass your resources (food, metal, and wood) to be able to create even stronger forces. Prove your worth by defeating characters in your path and they may even join you, allowing you to play as them, which will unlock different special attacks and spells you can unleash with enough mana during battle.

Like its predecessor, Nano Kingdoms 2 is one of those games that reminds you that just because it's in your browser doesn't mean it can't look and feel professionally done. It's a gorgeous little game, with clean, crisp art and design, and the simple yet engaging gameplay makes it a perfect choice for strategy fans who don't want to feel like they need to keep a guidebook balanced on their knees while they play. The variation in heroes means you can always tackle a battle with drastically different abilities and even units, since each hero brings their own unique talents to the table in ways that can make a previously impossible battle manageable. The downside is that, also like its predecessor, Nano Kingdoms 2 lacks a persistent upgrade system for most purchases, so battles tend to start out frustratingly routine as you wait around for your resources to build up so you can purchase all the accoutrements you need over and over each time. Though Nano Kingdoms 2 may really lack the depth to provide enough of a challenge for strategy fanatics beyond resource and unit management, but with a rarely-seen level of professional polish to its design and whimsical style, it's well worth a skirmish or two to get your blood pumping. And next time? Take my advice and never trust a jester. I thought you learned your lesson after Dhoulmagus anyway!

Here's a nice strategy for the last few levels: