Poor Nancy. One would think that after solving the mysterious accidents in Nancy Drew Dossier: Lights, Camera, Curses!, she would have easily earned herself a little break. But our plucky investigator gets no such respite and is already working on another case. This would be bad enough on its own, but having her next case take place in an ultra fancy spa/resort for the social elite where she is teased with the finest luxuries around, well, that's just beyond the pale. Having to pretend to be one of the serving staff, we like to call that salt, lemon juice, and battery acid in the wound. 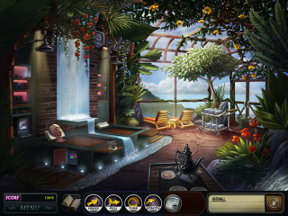 Yet in Nancy Drew Dossier: Resorting To Danger, our Miss Drew takes it all in stride. Okay, maybe she's a little put off by some of the comments that get tossed her way, but she shrugs them off like a trooper and gets down to the business at hand. And what is the business at hand? Well, this high end relaxation spot for the wealthy has fallen victim to a series of almost-harmless bombings. Yes, bombings, and because the Rodondo's manager is more afraid of bad publicity than he is of, you know, explosions, he's hired Nancy to take on the case as opposed to calling in the cops. If she could just use the phrase "construction accident" in lieu of "explosion" that would be just fabulous.

You take control of Nancy in this hidden object adventure and your responsibilities are twofold. Obviously you need to get to the bottom of the bombings. You'll look for clues, solve puzzles, play mini-games, and talk to people to get information out of them. Oh, and you might just be required to actually disarm a bomb or two every now and then, no big deal. But, remember, you're trying to solve this problem on the QT, so to speak, so you can't let the upper-crust guests find out that you're a detective. Thus, while you are tracking down a mad bomber, you'll also be spending quite a bit of your time giving facials, fetching beloved pets, etc.

The core gameplay remains largely unchanged from the first Nancy Drew Dossier game. For each setting you'll be asked to achieve one or more goals and to do this you will have to find and match up pairs of objects in the background. You won't have any item lists to contend with, or random items that have nothing to do with anything. Also, pay close attention to the clues you receive as you will often be quizzed on them during later conversations.

So, if you're ready to once again don the guise of Nancy Drew, could you please report to the reception? There are some... um... towels that need folding. Yeah, that's the ticket. 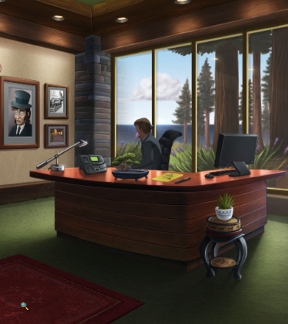 Analaysis: With only two installments thus far, the Nancy Drew Dossier series is proving to be quite strong indeed. The key to its success is finding a perfect balance between the often hybridized point-and-click adventure and hidden object genres. What results is a game that provides a faster, more casual experience found in most adventures, while at the same time giving you a HOG with a bit more depth and purpose than usual.

In fact, Resorting to Danger manages to improve upon an already stellar formula, though only in subtle ways. Perhaps most notable is the fact that this time puzzles and mini-games are better integrated with the ongoing story. The bonus game from the first Dossier has been axed in favor of a different bonus game that is a direct part of the storyline. Also, small changes and adjustments to the interface allow for modest improvements in interacting with your environment.

Another thing I can't help but appreciate is the variety and quality of puzzles and mini-games, none of which seem to have been brought over from Curses. Of particular note here is the facial puzzle which is remarkably similar to Bart Bonte's Factory Balls.

The artwork, as one should expect, is superb. On top of that, the cut scenes have a more dynamic feel to them, most likely from an increase in the amount of animation. Unfortunately, Danger falls victim to its setting, and in this regard comes up a little short compared to its predecessor. Compared to a movie set/theme park, a spa/resort is nowhere near as intriguing and it shows. This is not to say that the backdrops don't look good, mind you, they just aren't as exciting.

Don't let that scare you off, though, as that's just about the only weakness Danger has. Given that for a resort there are still some pretty interesting rooms to comb through, this isn't much of a weakness at all. Beyond that, Resorting to Danger is most definitely a credit to the series. Excellent side games combine with that unique Nancy Drew brand of object finding to create yet another gaming experience that is tough to put down.

Follow the tutorial - the walkthrough starts from the moment, you are on your own.

Chapter 3 - Grumble in the Jungle

Chapter 4 - Hair of the Dog

Chapter 5 - On a Molecular Level

Chapter 10 - Belly of the beast

Chapter 12 - Nicking off the top

Latest from now on, the game will be the same for everyone again.
Chapter 29 - Tunnel of danger

Congratulations, you solved the case

Follow the tutorial - the walkthrough starts from the moment, you are on your own.

Chapter 3 - Grumble in the Jungle

Chapter 4 - Hair of the Dog

Chapter 5 - On a Molecular Level

Chapter 10 - Belly of the beast

Chapter 12 - Nicking off the top

Latest from now on, the game will be the same for everyone again.
Chapter 29 - Tunnel of danger

Congratulations, you solved the case

Wow, Kayleigh is a MACHINE!!! Thanks, Kayleigh!

I am unable to combine the ingot with the crucible in chapter 13…is there a trick?

Rana - combining ingot and crucible
The only trick I can think about, is

That you have to do it inside the inventory. And try to do anything else before, maybe you missed some?

Does anyone know what to do after the bomb shelter door puzzle? When I solved the puzzle, it just wouldnt move on to the next part or anything.

Did you check the walkthrough to make sure that your solution was the correct one? If it was, and it doesn't move to the next scene, you may have a bug in the game. In that case your best bet is to contact the vendor where you purchased it and see if they have a fix.

I can't get past the garden. I gave the pig to the statue and can't move on. Please help.

whats the diff between nancy drew dossier and N.D. mystery?

Looking for help with the mythology puzzle in the garden. I can't get the people to match the characters. How do you even know if you have done it right?
Any help would be great....so stuck!!!pv

I have tried everything on chapter 13 and I am still stuck. It won't let me move on even though I did everything. Please help.

Hey on chapeter 7 I just CANOT open up the the little disk thing help what do you do its so hard answer soon please.

Erin - Chapter7
Please have a look at our walkthrough on top of these comments. You will find help there.

I went into Hefler's lab but didn't want to. How do I get out?

i cant get passed the where you have to open the bomb shelter i have all the coins and i have tried looking at the journal for clues and i try to put them in again and it doesnt open.... i need to know what coin goes with what symbol to open the door so please help. :)

can someone help
In the room where you have five different coloured lights on the ceiling: red, white, green, yellow and black. can u tell me which order to press them in. thanks!!!

I am on mad scientist and the clipboard disappeared..it now will not let me click on anything, so anything or get past this...help..what can i do. I dont want to have to start game all over.

Thank you so so so much for jayisgames.com once again for providing me with my Go-To-Guides for all my PC games, you trully are a lifesaver!
In this case, thank you specifically to Kaleigh for taking the time to help out all of those lost in our HOG worlds, lol! Just when I think I am gonna go bonzonkers, and I can't take it anymore, I come right to this site to help me pick up what just being laid down, lol :)
I do however, have one question-on the final set of facials, did anyone have a problem with #4 and following it exactly as stated in the guide? I had to play around with that one a few times, but the given directions STILL helped me immensely, as well as the disarming of the bombs-EVERY TIME!
Thanks again for your stellar guide, looking forward to the next one!
Nicole :)

i can't get past where your in the maze and have to find the four lost clients you can't see anything soeone help me please!