A visual novel adventure where you go to school with and potentially date a bunch of characters from NAMCO BANDAI games as the cousin to the star of Katamari Damacy?... hold on a moment. (Slaps self across the chops.)... okay, either this isn't a hallucination, or it is, and just a very persistent one. Either way, welcome to Namco High (requires free registration) from a massive team of talented folk including Homestuck creator Andrew Hussie, Brian Clevinger, Noelle Stevenson, and many, many more. As the game begins, you've gotten yourself in trouble by getting carried away when you tried to emulate your more well known cousin, and find yourself in detention with a bunch of other ruffians. Ruffians like Mr Driller, GALAGA, and Nidia, to name just a few, including a couple from Homestuck itself! But give it a little time and you'll soon discover that these troublemakers are just misunderstood (like you!) and if you persevere and get to know them, who knows... romance might even be in the air! Note that while the game itself is free to play, only six characters are free to date, and all others must be purchased via individual $1.95USD microtransactions, or in packs. 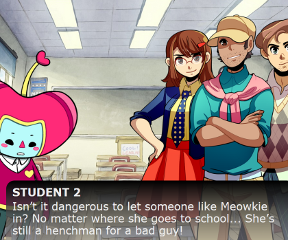 It goes without saying that Namco High is very, very tongue-in-cheek in a very Hatoful Boyfriend sort of way, although much less straight-faced than Hatoful Boyfriend wound up being. After all, we are talking about a game where a sentient spaceship plays Juliet in the school play, and a sassy drum is the most popular girl around. If you don't know who some of these characters are, don't worry... that's not the point. Just click to advance the screen and make choices, and the game will autosave for you every few minutes. "Cousin" (the default name for your character) is treated as mostly gender-neutral, though a few masculine references are aimed at them, so take from that as you will, though they are equally interested in either males or females themselves!

As a game, Namco High is sort of bare bones, since your choices are comparatively few and limited. Choose to spend time with someone... or not. Keep spending time with them to advance their storyline. That's about it. But where it shines is its sheer goofy energy and design. Though some might find the competing art styles amoung the cast distracting, it adds a wonderful distinct feel to each character and their stories... when tend to be an oddly engaging combination of bizarre and touching across the board, and frequently funny to boot. It would have been nice to have been given more choices that amounted to something beyond "What scene do you want to watch?", since the whole thing winds up feeling mostly like an interactive narrative. It can get frustrating to see your main character decide for themselves how to handle every single situation that arises since it removes that sense of actually being present in and steering the story yourself. Each "route" should probably only take a half hour or so at most to read through. 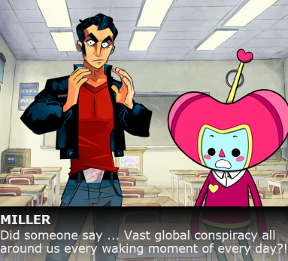 Unfortunately, Namco High feels like it's being needlessly obstinate about the whole process of playing it. A free account to play with a third party? Ugh, but okay, fine. That's why I have my secret spam e-mail account. Another free account with a separate third party to purchase extra content? Really? If players want to give you money, why on earth wouldn't you streamline the process a little more? At least by allowing you to purchase characters individually (with the perplexing exception of the Homestuck characters) you can pick and choose your favourites instead of forking it over for a bunch of people you aren't interested in. It also lacks a few of the more convenient features common in most other visual novels, such as [spacebar] to advance text, or using the scroll wheel to go back through text, or right-clicking to open a save/load menu... or even being able to save freely, period.

Despite these bumps in design, however, Namco High is still worth checking out. It's clear there was a massive amount of work put into it, and the clever ways they've breathed life into and continued to develop their eclectic cast of characters are impressive. While it's true that the game feels overly silly at times, the way it sneaks depth and insight into itself alongside all the laugh-out-loud humour (watch for a funny cameo by one of Namco Bandai's most iconic heroes at the most unexpected time) is remarkable. If you've ever wanted to schmooze a cagey conspiracy theorist, recite poetry with the universe's emo-est hero, or uncover the secret soul of Mr Diller, Namco High is well worth your time.

Weird, I'm getting a notice my browser isn't compatible. Javascript is enabled, no ad blocks, and using the latest version of chrome. ):

It was, and still is, very 'was that it?' for me. I preordered the game, and chose to go through Terezi's route first, and I was super disappointed by the lack of choices and the brevity of the entire thing.

There's lots to recommend (Davesprite's route is hilarious), but don't expect a complex roller-coaster of an epic.

I want to play, but also get the message that my browser is not compatible or ad block is on (all of which I turned off). Using Firefox 18.0.1. Would upgrading to v.23+ really make this work?

I am running the latest FireFox (26) with no issues whatsoever.

I agree with Mint on this one. I bought the Deluxe PAK as well, and I was rather disappointed. I played Blue Max's storyline first, and was a bit surprised at the sudden ending. I kinda just brushed it off thinking it was a joke ending because it was so cheesy. But...nope. All of them follow he basic end plot. The art and dialogue are great, and it's a really interesting concept, but it just lacks in the story department. I would highly recommend it if it were more like a proper 'Dating Sim' game, but for now, it's more of a 'New Kid at school' sim. Just not enough story development, and the character development that should go with it is just as rushed.

"Namco High is currently winding down, and as of March 29th, Namco High will no longer be for sale. The servers are going offline on June 30th, so please complete playing by then.
Thank you for playing Namco High."

2,990 Views
1 Comment
chrpa— Jayisgames needs your help to continue providing quality content. Click for details Welcome to Weekday Puzzle! In xalezar's puzzler you start in a fairytale land with Jack trying to climb a bean stalk. Then in Thomas K. Young's platformer...  ...