Akaw-akaw-akaw-akaw... That's the sound of Nam-Cap, an innovative retro arcade game from Studio Pi�a. Billed as an arcade cabinet imported from an alternate universe, Nam-Cap takes the familiar concept of Pac-Man and turns it backwards in many ways. 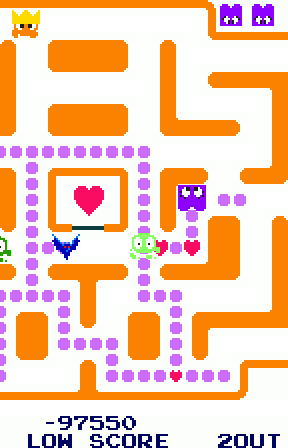 You play Nam-Cap, the titular heroine. Use the [arrow] keys to navigate the maze, leaving a trail of dots behind yourself. Your goal in each level is to fill the whole maze with dots (as opposed to consuming them all, obviously), but two catches make this task substantially difficult. The first catch is that the heart in the center of the maze will shrink as you lay dots, and if it disappears completely you can lay no more.

You can prolong or recover your dot-dropping privileges by catching one of the four kings that also wander the maze, forcing it to scramble back home to recover its crown. (Why kings instead of ghosts? I'm guessing it's so the spiky part can be at the top instead of the bottom.) However, that's where the second catch comes in: when you catch a king you leave a small heart behind, and if a king nabs that heart poor Nam-Cap will be temporarily weakened, not only unable to create dots but erasing every dot she passes over! Get caught while weakened by a king or at any time by the level-specific baddie, and you lose a life; lose all your lives and that's all she wrote. 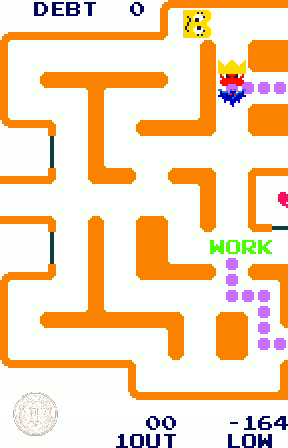 The thing most people overlook about creating something set in an alternate universe is that it has to make sense within that universe, ignoring our own. Nam-Cap is a little uneven in that area; seeing the kill screen at the very beginning of the game is just odd, but on the other hand, "Work Began" as a substitute for "Game Over" makes sense because once you're done gaming, it's time to get to work. The developers might have just gotten lucky there, though.

But that's not what matters to us; what matters is how fun the game is, and this game is definitely fun. Despite the reversal, Nam-Cap captures everything that made Pac-Man entertaining, from the alternating pursuit towards and from the four other parties in the maze to the panic when you thought you'd finished the level but really there's one little spot of the maze you haven't gotten to yet. There are even little cartoons between some levels, like in the original arcade Pac-Man, although they make slightly less sense because they're attempted direct adaptions. The game has its inherent flaws, like confusion about what needs to be covered in dots and what doesn't, but those are easily overlooked in an otherwise entertaining game.

Possibly (likely) stupid question but how am I meant to start the game? It says press [1] or click the button however I've pressed every key on my keyboard and there's no button like the one it told me to click and I've clicked everything else.

@Dandy: It should be right there in the lower left corner.

This is not by YAWDIM. This was stolen from OCMAN! (Geddit?)

The body of the review has the wrong link to the game.

Odd... on my older computer it wasn't loading properly. It works on my laptop though. Not a bad game, boring after a few rounds just like PacMan but a nice concept. Now I want someone to make Gnok Yeknod or Gud Gid.

Why stop there? I would love to see Snilbog N Stsohg but it would probably be RIDICULOUSLY EASY! (Hint hint)

A bit disconcerting at the start but I got it at some point. Even the strategy involved is reversed at times. Instead of constantly moving, you have to stay still as much as possible when a heart is eaten.

Another thing I'd like to mention. The center pen can be accessed and seems to be completely safe. You can make an entire game plan on this fact alone and use the pen to stage guerilla style dot laying and quickly retreating inside when things get too hot.

That's not a kill-screen at the beginning. That's the video RAM going through the boot test.

If you've ever watched a Pac-Man arcade machine (or many other games from the same era) power-on, or run (a legally licensed copy of!) Pac-Man with a sufficiently accurate emulator, you'd see something very similar. (You kids with your fancy 'loading screens' have it too easy! And git offa my lawn, dagnabbit!)

Referenced further by the "5" key being the "Credit" key, and "1" being the "Start" key. I believe those are the default keys for those functions in MAME - making this game's "shell" an emulator simulator.

3,657 Views
3 Comments
chrpa— Jayisgames needs your help to continue providing quality content. Click for details Hi! Weekday Escape is here! We'll start with a short but sweet game from giucalistro. Next up is a game from TRISTORE, which is a very successful...  ...

What are the Coolest Video Game Weapons?

361 Views
0 Comments
jayisgames.com— Long gone are the days of video games being considered children's toys. Nowadays, the video game industry has grown into a multi-billion-dollar industry, with hundreds of millions of people from all around the world playing video games. Although the real...  ...