Naked Melee Armageddon is one of the most aptly named online games ever created. Your simple goal is to overwhelm alien attackers by placing naked humans on the screen as fast as you can. Why everyone's naked, no one really knows, but you don't have time to sit and ponder. After just a few seconds the aliens will attack, at which point all you can do is kick back and watch the armageddon. 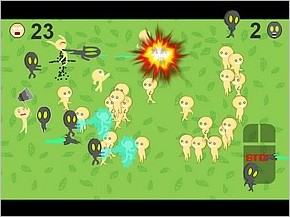 You have roughly five seconds before the melee begins to load the screen with as many people as you can. When an alien and a human meet, they get into a little skirmish. There are several crazy ways in which they destroy each other, such as axes, explosions, ninja moves, electrocution, etc. No matter the outcome, both the winner and loser vanish. The only way to win is by outnumbering the enemy.

Yes, it's a laughably simple game, but yes, it's fun. There are five levels of difficulty, each requiring more people to defeat the onslaught. Win or lose, nothing happens, you just go back to the title screen. Kind of like those "I Saved The World And All I Got Was This Lousy T-Shirt" things.

But you know, Naked Melee Armageddon is just too wacky to pass up. Play.

(P.S. Yeah, everyone's naked, but there's no detail and it's all a cartoon, so it's safe.)

clever, simple, fun and well made!
the problem, I completed the hardest level with 17 dudes left 1st time.....

Fun but way too short >_ the little person dance at the end is too funny!!!

fun stuff, I think it'd be a bit more interesting if it wasn't a guaranteed 1 to 1 death ratio, so maybe the designer could assign probabilities of surviving (which would be different for the aliens and naked guys...at the lower difficulties the ratios favor naked guys, higher difficulties either even or even favor the aliens) after fighting so that 1 naked guy or 1 alien could potentially defeat 2 or 3 people before they die themselves (that way the point of the game remains the same: click real fast to get as many men on the board as possible, but the outcome's not as obvious)
Because otherwise the game's basically over after 5 seconds of clicking and no real need to watch...but if those probabilities were incorporated and you were down 1 man to 2 at the end, you could still potentially pull it out and it'd be worth sticking around to watch and have you pulling for your guy to win.

I know zip about programming games so don't know how difficult that'd be to code, but I wouldn't think it'd be too tough to tweak.

Still, overall it is a nice, fun, easy game that makes for an amusing time waster. Simple and effective. And it has some nice potential if the designer wants to make a version 2.0

Hahahahahahaha, completed the Superman (hardest) level with 11 naked guys left... but I got help from some friends xDDDDDD

i cant do it on easy mode how do i win

Fabulous is the word that comes to mind. This game is fabulous. I love it.

You can keep clicking and when timer starts, right click and hit the rewind button. Keep doing it until you feel you have enough men to win

aw. fun. i absolutely love that the aliens have bright blue blood!

nice and easy with mouse keys ;)

I loved it. It was hard though, pressing the mouse so many times quickly I mean.

Well, I'll tell you how my friends and I won:

If you use a laptop, you can left-click with your mouse AND the left button of the touchpad. So I guess that if you connect several mouses to your PC it will work the same way xDDD

I can't believe some of you having another or more people help you in this game. You really don't need their help honestly. I done it myself and I got 81 humans so far.

the game is easier if you have other stuff running, ie slowing down the scripts and hence the timer... so, if you are having trouble winning... slow your comp down ;)

Well HoboZorts, everything is funnier if you do it with someone ;-)

...exactly what are those aliens doing? It better not be what I think it is...