Indie dark otome visual novel Nachtigal, by Cyanide Tea, follows Miranda Namatgira, a college student whose Belgium vacation takes a turn for the surreal when she gets lost late one night and stumbles across a castle deep in the woods. Instead of help, however, she finds two vampires who are stuck minding the sprawling estate while the rest of the family is away. Lacking the authority to simply kill her on their own, and unwilling to let her go now that she knows their location, they decide their best solution is simply to keep her prisoner until the rest of the vampires return in two weeks, and Miranda's only hope of survival is to keep putting her best foot forward. Available both as a free download (enter "0" in the payment field) and a "pay what you want" title, Nachtigal offers two possible male/female romances and six endings... some of which are a bit more "happily ever after than others". 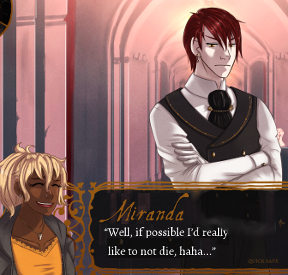 Miranda's two jailers are Lord Adrian, an unpredictable but exuberant vampire who hasn't gotten out a whole lot within the last century or so, and Luca, Adrian's taciturn servant and guardian who also seems to serve as the vampiric manifestation of Grumpy Cat. Your decisions and interactions with these two over the next two weeks will determine which of the game's six endings Miranda winds up with, so don't be afraid to hit [S] to save your game whenever you like. Despite its subject matter, Nachtigal is actually a surprisingly cheerful game in tone, thanks largely to Miranda's perhaps unreasonably easy acceptance of both her situation and the existence of vampires in general... though admittedly a game where the protagonist spent her time gibbering and sobbing in terror wouldn't exactly captivate. While Luca tends to come across as a more familiar brooding male lead, Adrian actually winds up being extremely entertaining. He doesn't know a lot about humans, and spends most of his time being intrigued, horrified, and baffled by both basic biology and Miranda herself.

As gorgeous and funny as Nachtigal is, however, it is very short. It's not a visual novel simulation game, so sometimes days will pass completely without event or merely after one short conversation. Considering you only have two weeks, that makes it hard to form anything beyond a superficial connection to the characters, which is unfortunate given the quasi-romantic subplots. Despite the goofy tone the story takes a lot of the time, the romance aspects are troubling because Miranda is in a situation where her consent isn't really consent, because she's being held captive by two powerful men who can and do force their will upon her, and she really has no other options than to do what they say. If your only choice is to do something or get hurt or die, then that's not really any choice at all, and both love interests make it clear that no matter what Miranda may want in the beginning, it's their decisions and desires that matter, making the romance have some squicky and upsetting tones from the get-go. It can make Miranda's cavalier attitude all the more hard to take in that case, and for some people, means Nachtigal might have benefited from a longer length and more choice to flesh out its characters and its consequences in ways that balanced its subject matter, or gave more impact to the plot twists.

How romantic Nachtigal is, is largely a matter of personal opinion and how much you're willing to overlook or take at face value. Despite my criticisms of the subtext and tone, however, it's still a game I enjoyed playing and one I wanted to immediately go back through and find the rest of the endings. It feels like there's a lot more potential to flesh out both the world and its characters in another game, particularly the rest of the Nachtigal family. An average play will probably only take most people around a half hour or so, but if you're looking for an unusual take on a vampire romance, Nachtigal is definitely worth checking out.

I really like the characters here, sure it's quite short and the romance aspect is kind of rushed, but for someone who's played Diabolik Lovers, this stuff is seriously pure fluffy puppy love! Stockholm syndrome? Dark? Pfft! This is super tame!

Anyway I found pretty entertaining for its length, but I can't seem to get ending 5.

I have a feeling that there's some hidden parameter somewhere that will trigger a bad reaction with the vampires when you choose to "live" when given the choice.

It's all a matter of perspective, and I would have been remiss not to bring it up. You're talking about a girl held prisoner under threat of violence and death by two males who repeatedly threaten her, and particularly

when they both forcibly feed from her. It doesn't matter that she eventually decides she's okay with it. She initially resists and pleads with them not to, Adrian uses mind domination to force her to do it, and Luca does it at knife point. She is visibly terrified in both scenes.

That's something that could be triggering for some people, and thus should be addressed, although personally I feel NEITHER relationship is healthy and fluffy regardless.

Yes, upon reflection, it's probably because I'm comparing it to a MUCH DARKER game that has a similar premise. (compared to that, almost ANYTHING is tame)
And I found ending 5, turns out that it's the same as ending 4, but just "easier" to get. I'll link this: http://narihira.tumblr.com/post/66038258716/hi-i-just-finished-playing-nachtigal-and-wanted-to-say

Though, ending 5 is the disturbing ending in the game for me, more than ending 6. It successfully changed my impression of this being "tame".

Thanks so much for reviewing this, Dora! I try to do what I can for the indie games I like, and since my friends aren't really into VNs and therefore word-of-mouth doesn't really work, I figured what better way to get the word out and have them noticed than by requesting it from my favorite review site.

Hmm... I just played the entire game for the first time and got the

I think I'll play it through another time to try to get a better ending, though...