Remember the puzzle game by EPICPIKAGUY (Ethan Clark)? It came out almost two years ago, and it was one of the best games of that type...and it was the second game about freelancer explorer Steve. How it all started? In the year 20XX, The Kitty Federation sent a crew, lead by captain Laika, to a distant planet. When they failed to return, The Federation got worried so they sent the best officer, a cat named Steve, to rescue them. But he failed, so The Federation hired freelancer explorer also named Steve who turned out to be very capable! 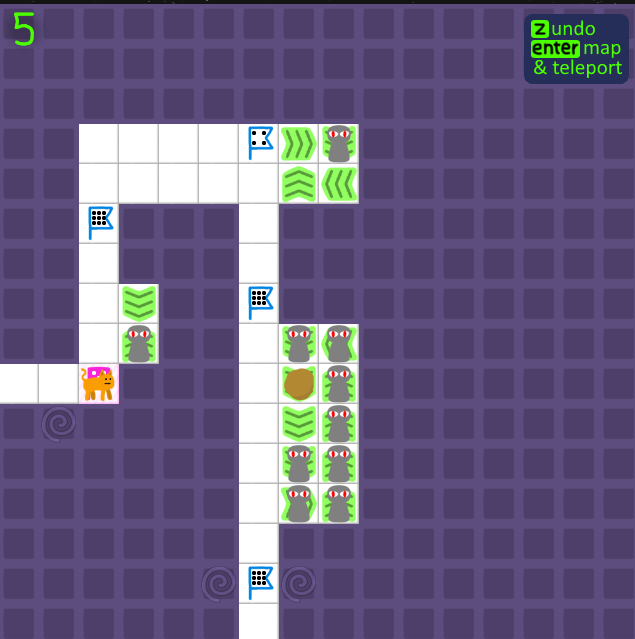 Steve rescued Cpt. Laika and all kittens (game 5 Step Steve) but they ran out of fuel on the way back and crashed into nearby planet and Steve had to rescue the crew again (game N Step Steve: part 1).

Now we've got the second part of the rescue mission and it's bigger and offers a lot more game time - and it's harder. Much harder. Fortunately, it's not a linear game, and if you can't master one level you can jump out of it at any time and go explore another part of the game. The principle of the game is very simple so as in part 1 you need to count steps and learn how to deal with the various obstacles in the game.

If you haven't played the first part or the prequel, maybe you could give them a try and familiarize yourself with the game and the rules. The last part of the mission isn't easy.

4,955 Views
0 Comments
chrpa— Jayisgames needs your help to continue providing quality content. Click for details Welcome to the Roundup 62 - Retro with four games! After you find the ten monkeys in the chapter, look in the inventory. You will find a...  ...

5,283 Views
0 Comments
chrpa— Jayisgames needs your help to continue providing quality content. Click for details The name of the game may sound familiar to some gamers, and yes, you are right. The original Cyadonia by James Newcombe came out fourteen years ago (and...  ...

5,018 Views
5 Comments
chrpa— Jayisgames needs your help to continue providing quality content. Click for details Hi! Weekday Escape is here! We'll start with the tomoLaSiDo's new cans and we've accumulated quite a few, five in total. Then we got a cute and...  ...