Mystery of the Ancients: Three Guardians

Boyfriends are a curious bunch. They play Counter Strike for days on end, forget to take out the trash and insist on looking despondent when you take them shopping. But at least your average boyfriend is unlikely to turn into a bear and attack you in the middle of a strange forest, which is exactly what happened to poor Elena. In Mariaglorum's new hidden-object adventure, Mystery of the Ancients: Three Guardians, a curse has descended upon Elena's hometown, together with a flock of especially nasty crows. It's up to Elena's aunt to save the day and rescue her niece's ursine beau. 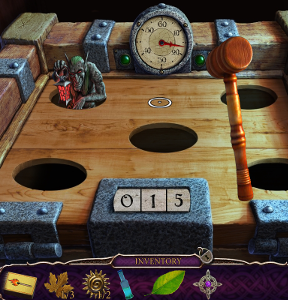 At first, it doesn't seem like the curse runs very deep. Your only opponent is a feather-cloaked weirdo who keeps making empty promises of destruction and misery. Unfortunately, soon enough it turns out he's just a lowly minion of the great sorceress Morrigan. To beat her, you'll have to channel the power of three ancient guardians through an amulet which is, of course, broken. As you track its pieces down one by one, you'll face monsters, deadly traps and a very grumpy bunch of carnivorous plants. There are lots of fun things to be done along the way, such as picking up items, solving puzzles and interacting with parts of the scenery. The various mini-games are plentiful and pop up where you least expect them, including the middle of hidden-object scenes. They might not always be very challenging, but they do provide a nice change of pace. The hidden-object scenes come in two varieties and they are quite clear and bright, so hunting for items is a pleasure. 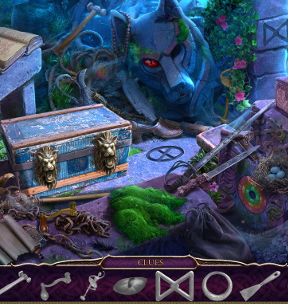 Mystery of the Ancients: Three Guardians is a grandiose, well-structured game. The story, though elaborate, doesn't get lost in the multitude of scenes and locations. The magic amulet as the key to vanquishing an ancient evil isn't exactly a new idea, but it's developed with care into a compelling narrative. The stunning visuals help complete the experience with their vibrant colours, formidable architecture and a good number of cutscenes to add a touch of urgency. Every aspect of the game is polished and tailored to satisfy a hidden-object adventure connoisseur, and even if it's not altogether inventive, it will certainly entertain you for more than four hours.

Mystery of the Ancients: Three Guardians is currently only available in a Collector's Edition, which includes a bonus level, concept art, wallpapers and more. Remember that Big Fish Game Club Members pay only $13.99 for Collector's Editions (or 2 club credits), and collector's editions count 3 card punches of 6 total needed for a free game.

I've played games built with this engine which were an uninspired set of hidden object scenes. This one isn't. The plot may be trite, but it is properly exploited and moves you along through that scenes well. The artistic blend of CGI and hand-drawn cutscenes are a worthy award for solving the puzzles, and there's an interesting new version of hidden object scene where the objects form a chain, each one helping you find the next. The traditional hidden object scenes are rare enough that they don't get annoying or boring.

I had to resort to hints or the walkthrough a couple of times, through not understanding what the game wanted me to do. But mostly it repaid pondering and experimentation. This is a good game of its type. Thumbs up.