My Kingdom for the Princess

My Kingdom for the Princess is a casual resource management/building game from Nevosoft. Mixing elements from simulation titles as well as borrowing from the time management genre, the game puts a big casual gameplay hat over itself and delivers a deceptively linear resource management experience with a surprising amount of strategy. Don't let the fairy tale setting and simple premise fool you, My Kingdom for the Princess is not a simple kids' game. 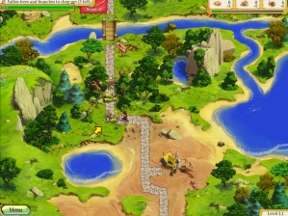 While Princess Helen was visiting her uncle, King Sigmund, a monstrous tornado rocked the land, destroying all but his castle and waking the cruel dragon Firemouth. To make matters worse, Helen's father was struck by lightning and now hangs on to his life by a thin strand. The Princess must get back to her kingdom, but with the roads and villages destroyed, it's nearly impossible to travel. Enter you, young knight, tasked with escorting the princess across the land, repairing the kingdom as you go. And King Sigmund has promised you a castle of your own if you're successful. It's a fairy tale beginning that depends upon you for the fairy tale end.

My Kingdom for the Princess uses a simple resource loop to ensure the game stays dynamic. As their name suggests, workers do all the work, dashing across the cobblestone paths at the slightest click from your mouse. They can remove obstructions from the path, gather resources, and make repairs. Some of these jobs require wood, and workers always need food to do their duty. Later, you'll have a third resource to think about: gold. Making sure you have enough of each, especially early in each level, is the key to survival.

Resources can be gathered by picking up random drops from around the map or by constructing specific buildings that bestow resources every turn. Sawmills, for example, give one wood every game minute, while farms do the same for food. Upgrading your cabin allows you to utilize additional workers, an invaluable resource that lets you do multiple tasks as the same time. Which building you spend your precious wood constructing first is all part of the strategy.

At the bottom of the screen you'll notice a meter that fills up as time goes by. This is your bonus meter, a neat little device that allows you to unleash a special power when it's charged. These bonuses include a temporary new worker, faster worker movements, bonus resources, and much more. It's an excellent addition to the game that lends a more arcadey feel to the experience.

Each level has a small set of goals displayed at the top of the screen. As with most resource management/building games, these tend to be fairly simple. Most of the time you'll naturally accomplish them as you move around the map and explore every turn in the road. If you complete the level before the sun sets (shown by the meter in the top left of the screen), your future castle will get an upgrade. It pays to be prompt! 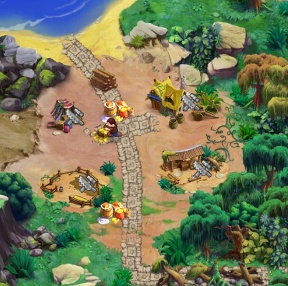 Analysis: My Kingdom for the Princess is dangerous. Dangerous because it's got that "just one more level" quality of addictiveness. Each stage is slightly more complex than the last, introducing new buildings or branching paths on the map, forcing you to adapt your strategy just a bit. Collecting resources and continuing your march across the map is all part of the hook!

Your first (and most important) decision in each level is to decide which order to do your tasks in and which path to clear first. Often you'll have the choice of building several structures which may or may not be one of your tasks for the stage. Take a look at the map before you start clicking, see where the easy resource deposits are and work towards them first. Amassing a pool of wood and food early on will be your ticket to victory.

The only shortcoming in this game is slight and involves the interface. One crucial component in any time management game is the ability to chain actions together by forming a queue. My Kingdom for the Princess doesn't emphasize the time limit so much, but waiting for a worker to clear some branches so you can click on the item behind it seems like a waste of time.

My Kingdom for the Princess gets the casual side of building/resource management games right. What looks like a straightforward design actually opens up a wide variety of strategies. Between that and the game's charming visuals/setting, you'll have a hard time putting this one down.

You have to have a warhouse. Without one you can only collect 20 items.

I have played this hame 87 times....and i cannot get a complete buildout on the first level of the ice world.
can anyone else?
this is the only level that i cant build everything available and still get done befor the guy says "hurry night is coming"
please tell me how to do this

John: It's easy. Collect all of the materials you see out, and start upgrading the sawmill. While that's working, start towards where you need to build across the ice, going south when you need more wood. Upgrade the fisherman's hut, then the mill again, and build out on the ice whenever you can. Don't bother with a second worker.

My Kingdom is something of a sleeper compared to the Build-a-Lot franchise, but don't miss this gem. It's a variation on most time management games in that there's more "puzzle" or strategy factor to it. Other than the occasional fly-by from a bat, you aren't constantly bombarded by fires/armies/bugs/whatever. Everything is laid out at the beginning of the level and you can even study it before your first click sets off the clock.

The graphics are good with everything clearly distinguished and reasonably sized. While the Princess/Kingdom scenario might seem overly cute, it's not at all saccharine. If these guys talked, I think they'd sound like something out of the old Asterix comic books.

Although in the review JohnB says that he doesn't like the fact you can't queue actions, this is part of the game -- it's up to you to keep all your workers moving.

It's easy to replay individual levels to get the castle bonus or even just to try to improve your score. As you replay levels you'll discover that

you don't always have to clear all the roads, collect all the resources or upgrade all the buildings to get the best score! There's stuff left laying around for you as bait that will cost you more than you'll get back. But then again, it might be worth it to take out that huge rock for a something small -- because it's a spot that regenerates resources.

My only dislike is that each stage has a silly jigsaw puzzle level and a level that's just running around collecting gold with no obstacles. Since each level functions independently (there's no benefit on further levels for having collected the gold), it's a pointless exercise.

I have been trying to stop the wolves from invading my camp for 3 days. I love this game, but I hate these sections. I just keep getting ambushed. HELP Please

Sections of bridge to repair - 3 flowers to pick - 8
Take 1 man and clear out all food, wood & gold
Build mine first chance
Cut down trees available
Build farm first chance
Continue to cut down all trees
Build warehouse first chance
**Be sure to gather all timed resources as they pop up.
**Until you have plenty of items stocked (which wont be until towards the end of the level, click the Bonus: Resources at level renew faster; each time you can.
When you have cleared all wood and food, you should have enough gold to break the rock by the middle bridge to retrieve the other woodpile.
Retrieve all resources then build middle bridge.
Retrieve all resources then build upper bridge.
Build temple and exorcise lower and middle ghosts.
Retrieve all resources then clear rock in center by ghost.
Collect lower woodpile and all resources.
Build upper bridge to ghost and exorcise.
Build first lower bridge and then upper to the right that goes to trees. Collect all resources.
Cut trees down until you can upgrade your cottage once.
Continue to collect resources and cut down trees until you can upgrade mine once.
Use one may to remove boulders on upper part of screen. With the other collect resources and build the upper mine.
Build lower bridge to rocks and clear rocks.

I can't get complete level 2.5 before the sun goes down. any suggestions?

I've gotten as far as level 4.6 and when I build the warehouse to get +1 resources I get no extra resources at all. Has anyone else had this problem or should I notify the site where I bought it??? It's frustrating to say the least. I'm literally stuck!!!!!!!!!!!!!!

I love this game ... However I am having some issues getting through 2.9 ... You have to collect 40 gold, but it costs 17 for the big boulders and then you have to start over. Am I missing something? Can anyone help me out? Thanks in advance, Roni

I thought this too for a while. I thought the extra resources would appear on the bar to the top right, instead it appears when your character picks up items on the field. So initially when you chop wood you get 3 logs, after first warehouse upgrade you get 4 etc. etc. HTH