My Kingdom for the Princess IV

It's tough to find a job in today's economy, isn't it? Especially if you specialize in something pretty obscure like, say, rescuing princesses. After all, most princesses can take care of themselves, so there's not a lot of call for rescuing these days. Once in a while, though, something untoward happens and you get the call to arms! Nevosoft is back with another exciting round of time management princess rescuing shenanigans in My Kingdom for the Princess IV, and the action is faster, more furious, and more rescuey, along with 50% more dragons! 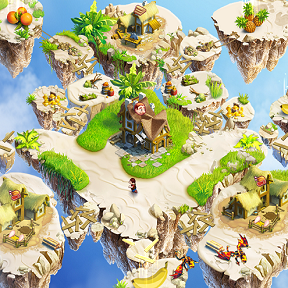 Some random prince named Arthur, but not the same Arthur from the first three games, has been tasked by his father to set up a princess rescuing service. Fortunately a few princesses get themselves in a jam and Arthur has a chance to grow the business. You control workers who pick up resources, clear roads, build bridges, and accomplish the tasks needed to clear a scene for travel to the next. Nevosoft has ramped up the gameplay by adding a new twist... multiples. Piles of resources are now real piles, each requiring more than one trip to pick up everything, and the same goes for obstacles. Remember those flying monsters that would hold up the game until you clicked them out of existence? Yep, multiples of them as well. Fortunately they've also added new buildings that can help shoot down the attacking dragonets. Did I mention the monsters are now all baby dragons? 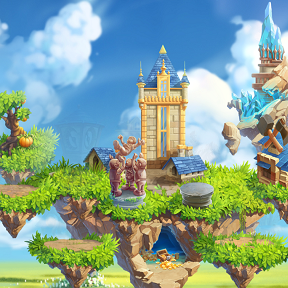 The scenery involved has changed as well, as Nevosoft has eschewed the traditional flat, two-dimensional maps in favor of floating, three-dimensional islands. A new dynamic causes the floating islands to "move" as the cursor moves, enhancing the 3D effect. The addition of multiples also changes strategies as labor becomes more vital than ever. The ability to "chain" your moves is an exceedingly welcome new twist as well. And, of course, it wouldn't be My Kingdom for the Princess if you weren't building a fantasy castle each time you complete a level in gold star time. My Kingdom for the Princess IV retains all of the fun of the first three games with the exciting new additions that keep the gameplay fresh. With five new terrains of ten levels each to explore, once again productivity levels all over the world are in danger as another highly addictive addition to the series arrives, causing players everywhere to mutter, "Just one more level..." Warning, here be dragons (and tons of fun)!

it's really a good one. do u know where i can get the details about all achievements?

In the screen with the hovering island, where the green play button is, is a small button with a picture of a castle. Click on that to go to your castle and you will see that it is actually made up of trophies from your achievements. If you click on the various parts of the castle, it shows the details of what you have achieved and what you can still achieve.