My Kingdom for the Princess III

Have you ever wondered what happens after a fairy tale ending? If you are the hero of the first two My Kingdom for the Princess games, then happily ever after means watching your children degenerate into a three-way battle for the hand of a royal princess. Prince (now King) Arthur and his lovely Queen Helen are back for more time management shenanigans in Nevosoft's My Kingdom for the Princess III, which explores what happens when the kids try their hands at running the kingdom. This is the story of what happens after "they lived happily ever after", although the gist of the tale may just be never have kids. Ever. 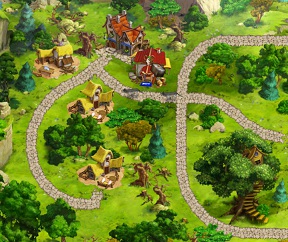 The youngest of Arthur and Helen's three children, Prince Andrew is secretly in love with the Princess Elizabeth, whose father has decided that she will marry one of King Arthur's sons, albeit the most worthy. First, Andrew must compete against his older brothers for the hand of said princess, using only some fetid swampland as a base of operations. My Kingdom for the Princess III follows Andrew's story as he works first to build up his inadequate lands, then as he attempts to escape the treachery of his older brothers, and eventually as he must rescue his own father the king and take down the ungrateful princes before they completely wreck the kingdom. So much for a fairy tale ending.

My Kingdom for the Princess is a simple resource management type of game. You begin with a hut that contains a single worker (and why do these princes never do the work themselves, seriously?). Said worker must gather supplies of wood, food, or gold and use those supplies to accomplish their task, whether it be to build adequate roads, dig mines, find valuable artifacts, what have you. Picking up a resource costs nothing, but some things must be gotten from hard labor, such as chopping wood, which costs food stocks. Farms, Sawmills, mines, and other buildings that can help generate more resources can be built, but you need to have enough wood to do that as well. Eventually buildings can be upgraded to produce more resources or, in the case of the work hut, house more workers with which to accomplish the various tasks. The level ends when all goals are met and the little workers are back safe in the hut. Sounds easy, no? 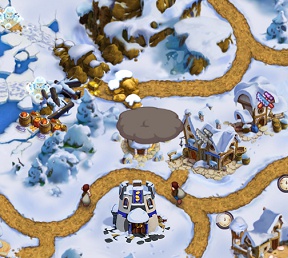 Well, yes and no. Workers will encounter obstacles that require more resources to deal with, such as steep ravines that need bridges, or heavy boulders that require smashing. The trick is to manage your wood, food, and gold in such a way as to complete all given tasks within a certain amount of time. Adding to the difficulty are lurking creatures such as wolves, ghosts, and hornets that require specialists to deal with, requiring more buildings and thus more materials on hand. Fortunately there's a nifty little gadget called a bonus meter which fills up over time. With it you can unleash special powers, like temporarily adding another worker or making your little guys move a lot faster. Each level has different bonuses on the meter at different times, keeping the gameplay interesting. There is also a "floating" bonus that shows up when you are low on resources. If you can spot the floating bonus when it appears you can click on it for your choice of one unit of wood, food, or gold, which is helpful if you are stuck and can't move any further without certain items.

There are five main locations and terrains in My Kingdom for the Princess III, from swamps to a desert, from ravine-laden forests to an icy wasteland, and each one requires slightly different strategies to accomplish the major tasks before the timer runs out. The player must finish each level before nightfall or a hideous fate awaits. Seriously. It involves a dragon. 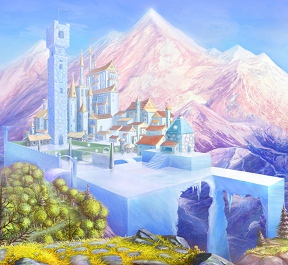 Analysis: While it's nice to see My Kingdom for the Princess back for another round, all that means is that players all over the world will suffer some major time suckage due to the highly addictive gameplay. Nevosoft hasn't messed with what is a winning formula: frantically fun time management with smaller "breather" games in-between involving avoidance mazes and whack-a-mole. If it ain't broke, don't fix it!

There are some differences from the first two games, new strategies and such that keep the gameplay fresh. What is very different this time around is the storyline, which strays a bit from the more usual fairy tale style of the first two. Seriously, the battle between Arthur's sons includes elements of King Lear, the biblical story of Joseph, and a little Cinderella as well. One has to wonder how the last 25 years has treated Arthur and Helen if they managed to raise such odious sons, at least the older ones. Looks like everyone involved needs some serious family therapy.

Fans of time management games rejoice, for the true heir to the throne has been found! With its stunning graphics, amusing animations, hilarious incidental sounds, and highly addictive gameplay, My Kingdom for the Princess III is a stunning way to lose a big chunk of time. Just be warned, make sure you don't have any appointments or commitments before downloading because this is one game that is devilishly hard to walk away from.

But why is it PC only? I LOVE these games! D:

Hang tight. A Mac version will be available soon, I'm sure of it. :) -Jay]